US pension fund performance describes the performance of pension fund managers. In the United States, pension funds are the funding mechanism for defined benefit plans, and include plans offered by both corporations and government agencies.

In addition, Del Guercio and Tkac (2002) provide evidence that corporate treasurers are more financially sophisticated than the average retail investor. Their greater financial sophistication may allow them to better identify skilled fund managers.[1] However, delegation may also result in agency costs. Rational investors’ desire high risk adjusted returns, but treasurers may have a different objective.[1]

Adonov, Bauer, and Cremers (2013) note that US public government defined pensions (unlike US corporate, Canadian and European defined pensions) are allowed by law to use the investment return rate as the discount rate for liability matching. This has led to both lower funding of pensions and the use of higher risk portfolios. The US public pensions have underperformed their more conservatively run counterparts by 0.60% per annum. [3] 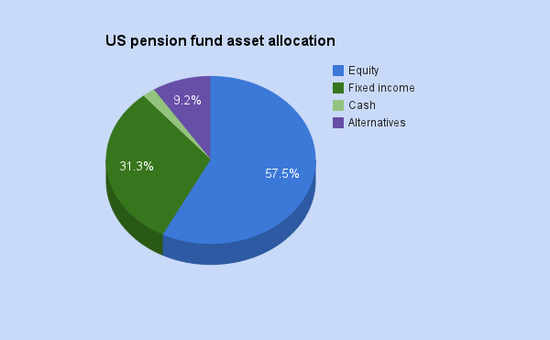 The table below shows mean expense ratios for US defined pension plans over the 1990 - 2010 period. The mean all assets expense ratio rose over the span to an end of period average 0.55% due to an increase in the strategic allocation to alternative asset classes. [4]

Andanov, Bauer, and Cremers (2012) find economy of scale to be advantageous in reducing costs:

"...one standard deviation increase in the log of assets reduces the total investment costs by 7 basis points. The scale advantage is much more pronounced for alternative investments, where a one-unit increase in the log of alternative assets results in 111 basis points lower costs. As expected, funds managing a greater percent of their assets through active and external mandates have higher investment costs."

A survey of early studies follows:

This study was among the first to investigate the performance of delegated portfolios for defined benefit plans. The study examines 148 portfolios over the 1966 - 1975 period. Using a CAPM framework they found the average portfolio outperformed the S&P 500 index by 1.44% per year along with a pattern of performance persistence.

The study examines the returns of 91 defined benefit plans during 1974-1983. Benchmarked against the S&P 500, these plans underperformed by 110 basis points per year and showed no evidence of superior security selection or market timing persistence.

This study investigates a sample of 1,526 plans during 1977-1983 and finds that the average plan underperformed the S&P 500 in a CAPM framework by 44 basis points per year but outperformed a weighted stock-bond index by approximately 38 basis points.

The study examines the performance of 341 investment management firms between 1983 and 1989. They find that the firms underperformed the S&P 500 by 260 basis points per year, and acknowledge that although some evidence of persistence exists, data limitations prevent a robust conclusion.

This study revisits the Brinson, Hood, and Beebower (1986) study, and documents positive selectivity and negative timing skills for a random sample of 71 equity managers from US pension plans.

This expansive study examines the performance and persistence in performance of 4,617 active domestic equity institutional products managed by 1,448 investment management firms between 1991 and 2008. Controlling for the Fama–French (1993) three factors and momentum, aggregate and average estimates of alphas are statistically indistinguishable from zero. They find only modest evidence of persistence in three-factor models and little to none in four-factor models.

The study examines defined benefit plan performance over the 1990–2010 period. The CEM database includes a total of 557 U.S. pension funds which account for approximately 30-40% of the asset under management by U.S. pension funds. In 2010, the holdings in U.S. equity of U.S. pension funds included in the CEM universe represent 4.2% of the market capitalization of the NYSE, NASDAQ and AMEX and their fixed income holdings are equal to about 2% of the total outstanding U.S. bond market debt.

The study finds that large plans, while having lower costs than smaller plans, face liquidity constraints due to size, as well as potential organizational issues that introduce agency issues which can reduce returns.

"Overall, pension funds seem to have most expertise in designing strategic asset allocation and market timing policies, rather than in actively selecting securities or in finding external managers with superior security selection skills.

Pension funds benefit significantly from time series momentum across multiple asset classes. Our results thus suggest that pension funds, and especially the larger funds, would have done better if they invested in passive mandates without frequent rebalancing across asset classes. This conclusion is confirmed when we compare the total performance of funds depending on the percentage of their assets that is actively managed. The most actively managed group of pension funds has significantly greater liquidity-related diseconomies of scale, as its funds that are in the largest quartile group underperform similarly sized funds with much less active management by about 62 basis points a year.

The study finds that pension fund costs are substantially lower than mutual fund fees. The domestic equity investments of US pension funds tend to generate abnormal returns (after expenses and trading costs) close to zero or slightly positive. Small cap mandates of defined benefit funds have outperformed their benchmarks by about 3% a year. The study authors note: