The London Share Price Database (LSPD) maintained at London Business School has served to form the basis for indexes that track UK asset class returns for three basic assets: UK stocks, UK bonds, and UK treasury bills from the year 1900 to the present. 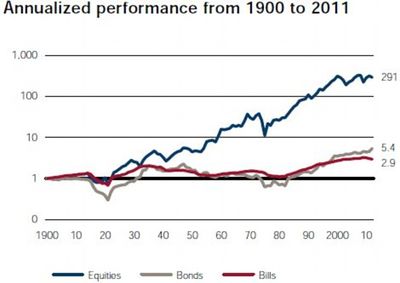 Fig.1. Returns from UK shares, bonds and cash since 1900, according to the Credit Suisse yearbook.[1] 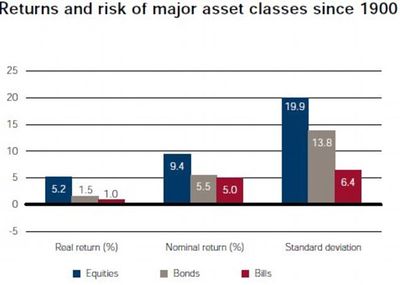 Fig.2. UK real return is the profit after inflation; while standard deviation reflects the risks taken of periods of under-performance.[1] 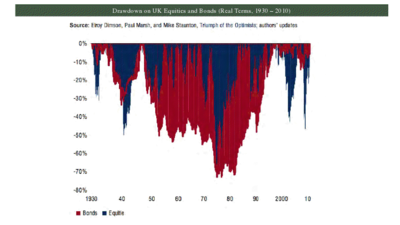 Of more importance to investors is the after inflation real return of investment. As figure 2 shows, the real returns of UK asset classes over the past century were 5.2% for UK equities; 1.5% for UK bonds, and 1.0% for UK bills. (These returns do not reflect the costs of investing nor the tax due on investment income).

The downside risk of UK stocks and bonds can be seen in the historical drawdown experience from market peak to market nadir, and ensuing recovery of value (See Figure 3. 1930-2010). The real drawdown experienced by the UK conventional gilts market reflects the eroding effect of inflation on nominal bond purchasing power.

Drawdown risk is moderated by diversifying investment between asset classes. A balanced 50% UK stocks/ 50% UK bonds portfolio has historically provided a standard deviation of 14.4%, virtually never suffered a decline of over 50%, and has experienced quicker recoveries of lost value when drawdowns occur.

Using share price and listing information in the London Share Price Database (LSPD) maintained at London Business School, a new set of indices for UK financial asset returns, starting in 1955, was created. These indices allow researchers to examine the cross section of stock market returns, as well as examine differing maturities of bonds.

The indices cover equities, including large, small, and micro-cap stocks. Examination of the value and small cap premiums in UK stock market returns have also been measured. In addition to a treasury bill index, the bond market indices offer separate coverage of intermediate conventional gilt, long term conventional gilt, and index-linked gilt bonds. An index of inflation was also calculated. The data are consistent with the CRSP/Ibbotson series for the US.[5][6]

Index linked bonds first became freely available in the UK in 1981. An ABN/AMRO/LBS index of inflation-linked gilts has been calculated based on the following securities.

The table below provides nominal and real returns for inflation-indexed gilts.

Indexing vs. active management in the UK

See also: Investing from the UK

A white paper published by Vanguard UK Institutional examines the performance of UK active funds against portfolio benchmarks over the fifteen year period, 1996-2011. The paper explores relative performance; the relationship between volatility and return; persistence of active fund performance; market cycle performance; expenses; and performance distribution. A summary of the paper's findings:[7]

The paper finds that the median active fund has consistently underperformed benchmarks (as defined in each fund's prospectus), especially when survivorship bias, which has been substantial over the period, is taken into account. The following table provides data for five, ten, and fifteen years. The first percentage shows percentage of active funds under performing benchmark performance (taking account of survivorship bias). The percentage figure underneath shows the annualized excess return of the median active fund (negative returns indicate under performance vs. the benchmark; positive returns indicate out performance vs. the benchmark).

In each of the equity and fixed income categories included in the table above, (for the period 1 Jan 2002 to 31 Dec 2011) the index benchmarks produced higher returns than the median UK active fund with less, or equal volatility.

While active strategies in some asset classes showed periods of relative out performance over some bull or bear market cycles, there is no systematic tendency for them to do better at particular stages of the cycle.