The original Trinity Study authors have updated their results through 2009. Below are Bogleheads' forum member comments on the impact of this study to investors.[1]

Asset allocation for retirees is a very important issue. Choosing one’s asset allocation will depend on a number of important factors involving the desired retirement income level and the sources of retirement income. Desired income levels will be affected by whether or not you are supporting others (such as a spouse) with your retirement income and whether you might desire to leave an inheritance or bequeath a charitable donation. Primary sources of retirement income will include the percentage of your needed/desired expenses available from Social Security and any other employer-based defined benefit pensions you may be entitled to receive, as well as any income coming from a decision to annuitize part of your wealth. A contingent source of income can result from having the flexibility to return to work should such a need arise.

The income to be derived from an investment portfolio will reflect any monetary amounts you need to regularly withdraw over your life expectancy; any additional monetary amounts you may desire to withdraw if possible; and the taxes you will pay on the withdrawn income. The costs of administering the portfolio are also a critical factor.[note 1] These withdrawals will provide you with the percentage of your wealth these needs and desires imply and can indicate the degree of flexibility you may have to allow your withdrawals to fluctuate over time. The Trinity and other studies examine the question of what percentage portfolio withdrawal rate (over a number of portfolio asset allocations) is sustainable without being prematurely depleted (the early studies' suggested a sustainable withdrawal rate of 4%). Entire books can and have been written on this topic.

The question addressed here is not “What should my asset allocation be in retirement?,” but rather “What do the Trinity study and other related studies imply about asset allocation?”

Early studies which helped develop the 4% rule did recommend asset allocations for retirees that were on the aggressive side. In the conclusion of William Bengen’s original 1994 article that started research in this area, he wrote, “Despite advice you may have heard to the contrary, the historical record supports an allocation of between 50-percent and 75-percent stocks as the best starting allocation for a client. For most clients, it can be maintained throughout retirement, or until their investing goals change. Stock allocations below 50 percent and above 75 percent are counterproductive.”[2]

Meanwhile, the Trinity authors in their 2011 update conclude, “The sample data suggest that clients who plan to make annual inflation adjustments to withdrawals should also plan lower initial withdrawal rates in the 4 percent to 5 percent range, again, from portfolios of 50 percent or more large-company common stocks, in order to accommodate future increases in withdrawals.”[3]

Boglehead’s Forum user traumamoma noticed in the updated Trinity study’s Table 2 for inflation-adjusted withdrawals that the probability of success was maximized with a 75% stock allocation, writing:

I guess the only question left to be asked is how many of us approaching retirement ( I am 6-7 years away ) are prepared to head into the great unknown of retirement with 75 percent in equities? It scares the hell out of me, to be honest. It is gonna take some real intestinal fortitude. I would have a tough time with that allocation now with 2 paychecks coming in every few weeks. Once the paychecks stop, it will be exponentially tougher. I would love to know if people are prepared to jettison "age in bonds" and actually act on the data presented above...

Fortunately for those who feel the same way as traumamoma, more recent work in this area has shown a reduced need for such an aggressive asset allocations for retirees.

First, regarding the Trinity study itself, the fact that 75% stocks increased the probability of success for 4% inflation-adjusted withdrawals is not a strong reason to choose this allocation. The difference between 100% success for 75/25 and 96% for 50/50 is just that in two years (1965 and 1966) the maximum withdrawal rate fell slightly below 4% with 50/50, but stayed slightly above 4% with 75/25. It is not that big of deal when considering your overall return requirements and tolerance for risk.

As well, already by 1996, William Bengen produced a figure showing that the safe withdrawal rate from a historical perspective varied very little for stock allocations between 35% and 90%. Using data for the S&P 500 and intermediate-term government bonds, he found that the historically-safe withdrawal rate was always above 4% for rolling 30-year periods since 1926 for stock allocations between 35% and 90%.[4]

The difference in data choice for the fixed income component between William Bengen's work and the Trinity study deserves mention. William Bengen used intermediate-term government bonds, which allows for a 100% success rate for the inflation-adjusted 4% withdrawal rate rule. Meanwhile, the Trinity study uses more volatile long-term corporate bonds, which caused the maximum inflation-adjusted withdrawal rate for new retirees in 1965 and 1966 to dip below 4%.

In 2010, Wade Pfau produced a similar figure (see Fig.1) using data between 1900 and 2008 for 17 developed market countries.[5] In the U.S. case, with this dataset, the choice of stock allocations between 30% and 80% had very little impact on the safe withdrawal rate. This 2010 article also speaks to the issue that the United States experienced very favorable asset returns during the 20th century relative to most other developed market countries. Hoping for a repeat performance of this in the 21th century may be overly optimistic. Specifically on the issue of whether future U.S. asset returns will be as high as past returns, Jack Bogle wrote in 2009, "Please, please please: Don't count on it" (page 60). This viewpoint suggests caution about expecting an overly aggressive stock allocation to work out as well as it has in the past. 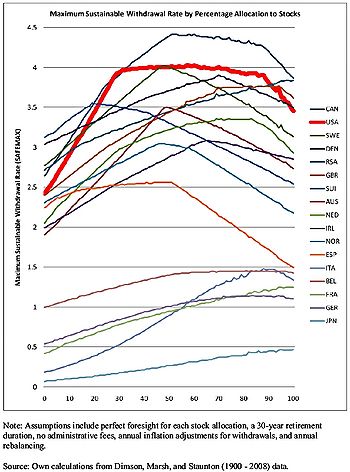 The above discussions were based on rolling 30-year periods from the historical data. Bogleheads Forum member Dick Purcell used the “Portfolio Pathfinder” software to investigate this issue using Monte Carlo simulations, which are simulated data based on the same underlying characteristics (means, standard deviations, and correlations) as the updated Trinity study. He reported the following results through private correspondence:

Applying Monte Carlo with the Trinity return-rate-probability data you provided, I get success probabilities well below what I’ve seen reported from historical-sequence simulation, and remarkable insensitivity to allocations. Here is a summary of what I get:

Also relevant to this issue, in 2011, Wade Pfau produced a figure which looked at the issue of optimal asset allocation over the working phase of one’s career and measured the expected satisfaction received from the distribution of wealth accumulation possibilities at retirement for different asset allocation strategies that varied over time as one approaches retirement.[7] Though the most aggressive of investors may wish to keep 100% stocks at their time of their retirement, the range of investors from somewhat aggressive to quite conservative would find their optimal asset allocations at retirement as ranging between 30% and 70% stocks.

Before concluding, a few key assumptions for these studies must be understood. First, they are based on historical data from the U.S., and so the applicability of these success probabilities depends on future stock and bond returns behaving with the same patterns as we have seen historically. Second, because these studies rely on long periods of historical data, they tend to only include stocks and traditional bonds. Retirees may wish to consider including TIPS in their retirement portfolios, as well as international assets, real estate, and other alternative assets. Third, though it is beyond the scope of this discussion to be considered further, retirees may wish to investigate whether they can benefit from purchasing nominal and/or inflation-adjusted annuities with a part of their retirement wealth.

These points aside, generally speaking, the studies mentioned above together tend to suggest that stock allocations anywhere between 20% and 80% will keep retirees within their area where maximum sustainable withdrawal rates will be at their highest. Beyond this, retirees should consider their own return needs and risk tolerances to decide on which asset allocation is most appropriate. One final point is that these studies do almost uniformly discourage a 0% stock allocation [though the results may or may not be different if TIPS could be incorporated into the analysis].