In the U.S.Treasury bills (T-bills) are short term debt instruments issued and backed by the "full faith and credit" of the U.S. treasury. Treasury bills are issued for terms of 4, 13, 26, and 52 weeks.[note 1]

Treasury bills are sold at regular auctions, where institutional investors bid on the prices they are willing to pay the treasury for its debt. [1] Bills are issued at a discount to face value and reach full value (par value) at maturity. The difference between the discount price and par value is the interest earned. The regular issuance of an auction priced U.S. T-bill dates from Dec. 17, 1929. [2]

The formula for computing the yield of a T-bill:

T-bills can be purchased from banks, brokers, and directly from the treasury through Treasury Direct. As noted, T-bills are auctioned in four maturities: [note 2]

Current T-bill rates are provided in the price chart to the right. 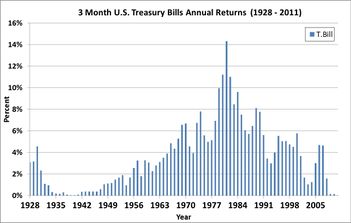 During this span, the annual returns have ranged from 0% and 15%, with the return ranging from 0% to 5% in 59 years. Historically, T-bills have realized the highest returns during the inflationary 1970's and early 1980's. T-bills have realized the lowest returns during the years of the Great Depression (the 1930's); during the 1940's, when interest rates were price controlled ("pegged") by the Federal Reserve; [6] and recently during the "Great Recession" period (2008 - 2014). The table below provides annual return data for three month T-bills and inflation. The historical T-bill returns are represented in the Figure 1. graph to the right. 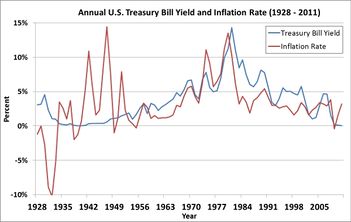 T-bills are not subject to credit risk (assuming no government currency default) as to the payment of interest and return of capital. However, they are subject to inflation risk, since T-bills do not always outpace inflation. Figure 2. to the right graphically illustrates the data.

In addition, as the short term interest rate can fluctuate significantly over a short period, T-bills are subject to income risk, the chance that interest income will decline because of falling interest rates.

Role in a portfolio

T-bills can be employed for the following investment purposes:

The interest income from a Treasury bill is exempt from state and local income tax. Due to the fact that T-bills are discount securities, and income is credited at maturity of the bill, individual taxpayers can use T-bills to shift income from one calendar tax year to the next tax year by purchasing a T-bill that matures after December 31 of the current year.