Many of the charts below have been generated by the personal finance toolbox Excel spreadsheet.[1] That handles most common tax situations, and is suggested as a tool many may find useful for an overview of their own situations. 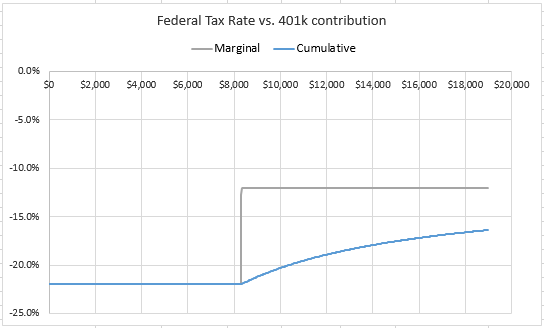 If that person expected to pay a marginal rate of 15% on withdrawals in retirement, the $8K saving 22% should go to traditional while the remaining $11K should go to Roth.

Similarly, a married couple retired at age 55 with $5K/yr of qualified dividends, looking at doing Roth conversions before starting Social Security, could take significant amounts from traditional accounts at 12% and lower rates: 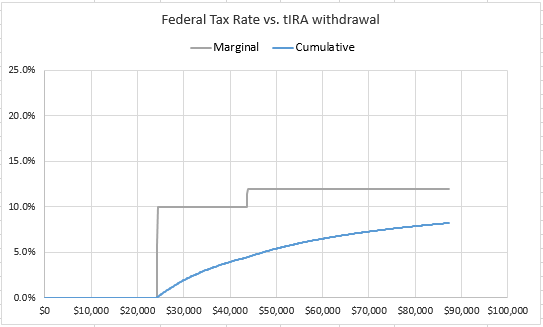 If that couple expected to pay a higher marginal rate on withdrawals once social security benefits start (e.g., see below), doing significant amounts of traditional to Roth conversions at these lower rates would be the indicated strategy.

When larger amounts may be beneficial, even though smaller amounts are not

The U.S. tax code is not as straightforward as the oft-cited federal tax brackets suggest. Looking only at those brackets, one could expect

When that happens (e.g., see the simple cases above), the "Marginal" line on the charts provides all the information one needs.

Due to various credits, phase-outs, tiers, cliffs, etc., however, the full tax code doesn't always work that way. For example, one may sometimes find

When that happens (e.g., see the more complex cases below that cover both these situations), use the "Cumulative" line on the charts to find the marginal rate on the whole contribution or withdrawal amount.

Worth reaching the saver's credit?

The saver's credit can provide a high marginal tax saving rate in an otherwise low tax bracket, but the actual rate depends on how much one must contribute to reach that credit.

The first chart shows the situation for a single filer starting with an Adjusted Gross Income (AGI) $500 above the first saver's credit tier. The first $500 of traditional IRA contributions would save only 12%, but contributing any amount between $500 and $2000 would save 22%. Above $2000 the marginal rate drops back to 12%. 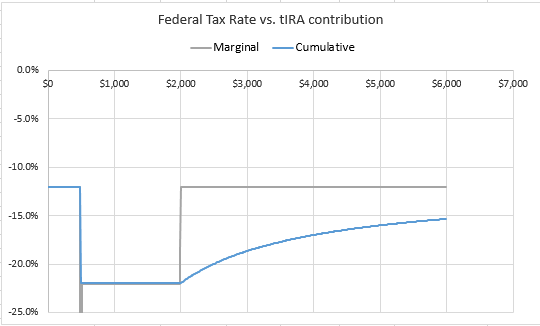 The second chart shows the situation for a single filer starting with an Adjusted Gross Income (AGI) $5500 above the first saver's credit tier. The first $5500 of traditional IRA contributions still save 12%, but here the highest marginal rate is only a little over 15%. 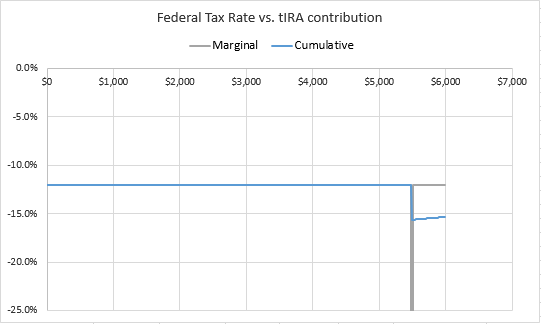 Worth pushing through the Social Security hump and/or IRMAA cliffs?

For this person, the overlap of the 85% SS benefit taxation phase-in with the start of the 15% qualified dividend bracket produces a marginal rate of 1.85 * (12% + 15%) = 49.95% over an $8K band. Beyond that, "normal" tax bracket rates apply, but Medicare premium spikes due to IRMAA tiers appear. In picture form: 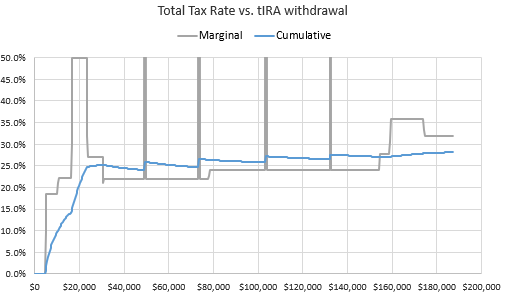 When determining "how much to withdraw (and perhaps convert to Roth) from traditional accounts?" then answer will almost certainly be "just enough to reach (but not exceed) one of the IRMAA spikes, or one of the step increases in the Marginal curve." But which one?

The answer will depend on the size of the traditional account and thus the expected RMD amounts.

If the traditional account balance is $100K, RMDs might be ~$5K/yr and it would not be worthwhile converting much more than that, due to the steep increase in marginal rates at low conversion amounts.

But if the traditional account balance is $1 million, it could be worthwhile to convert $149K/yr - just up to the step increase from 24% to 32%. That's because the marginal rate on a $50K RMD (the Cumulative curve) will be about the same as the marginal rate on a $149K conversion (the Cumulative curve again). As discussed in Maxing out your retirement accounts, paying the conversion tax with taxable account funds gives a small advantage to the Roth. Also, reducing the size of the taxable account will reduce the taxable dividends and thus the size of the 49.95% hump.

As may be painfully clear by now, the answer in many situations must begin "it depends on...". Currently there is no automated tool that combines a multi-year look with all the tax code and IRMAA tier effects discussed above.