This article contains details specific to United States (US) investors. It does not apply to non-US investors.

A Traditional IRA (Individual Retirement Arrangement) is a personal savings plan which allows you to set aside money for retirement, while offering you tax advantages. You may be able to deduct some or all of your contributions to your Traditional IRA. Amounts in your IRA, including earnings, generally are not taxed until distributed to you. See the general IRA wiki page for information which applies to all types of IRAs, including the Traditional IRA.

Growth within a Traditional IRA (eg. interest, dividends, and capital gains) is not taxable in the year it is earned. Rather, taxes on growth are fully deferred until withdrawal. This makes a Traditional IRA a good place to hold tax-inefficient investments and to perform rebalancing trades that sell appreciated investments.

Losses from a Traditional IRA – when you make a withdrawal when the balance is less than the basis – are not tax-deductible, unlike with a taxable account.

The maximum contribution limit for 2022 is $6,000, or $7,000 for those age 50 or older. You cannot contribute more than your compensation for the year. Compensation includes wages, salaries, etc., commissions, self-employment income, taxable alimony and separate maintenance, nontaxable combat pay, taxable non-tuition fellowship and stipend payments.[1]

Married spouses can also contribute to their own IRAs, even if they did not earn any income. The total contribution for both spouses cannot be greater than the total joint compensation.

Prior to the SECURE Act of 2019, Traditional IRA owners could not make contributions after age 70½ regardless of whether they had compensation, but this bill removed that restriction. There is now no age limit to contribute to a Traditional IRA.

Deduction of contributions to a Traditional IRA is subject to limitations according to one's Modified Adjusted Gross Income (MAGI):

You are not required to file a Form 8606 for years where your Traditional IRA basis doesn’t change, even if the basis is non-zero. 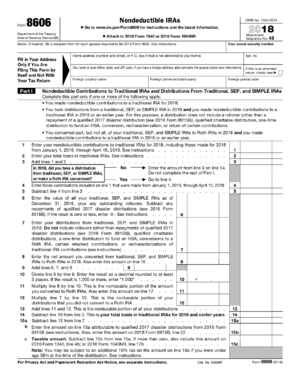 Stated simply, the "pro-rata" rule means that withdrawals from a Traditional IRA are considered to a mix of pre-tax and after-tax funds, in proportion to the relative sizes of the two balances. The pro-rata rule has some unexpected details. The rule is applied to the combined balance of ALL Traditional IRAs, SEP-IRAs, and SIMPLE IRAs that an individual owns. For example, if you have a $10,000 Traditional IRA with a $10,000 basis (all non-deductible contributions) and a $90,000 SEP-IRA, a $10,000 withdrawal from the Traditional IRA, only 10% ($10,000 / ($10,000 + $90,000)) will be withdrawal of basis and 90% will be taxable. Even though the Traditional IRA has a balance of $0 and could even be closed, the remaining $9,000 of basis is effectively transferred to the SEP-IRA.

The pro-rata rule is applied based on the combined balance of all Traditional, SIMPLE, and SEP-IRAs as of December 31st of the year in which the withdrawal is made. This gives the taxpayer some flexibility, for example, to roll over a Traditional IRA into a 401k later in the year after making a Backdoor Roth IRA contribution.

Exceptions to the “pro-rata” rule

There are two exceptions when funds withdrawn from a Traditional IRA are not subject to the pro-rata rule:

The net result of these two transactions is the same as a direct contribution to a Roth IRA. Neither of these two steps has any income limitations, and so taxpayers of any income can make Backdoor Roth IRA contributions. Aside from the complexity, there is no real disadvantage to using the Backdoor process. Due to the pro-rata rule, if you have any other Traditional IRAs, SEP-IRAs, or SIMPLE IRAs with pre-tax balances, the Backdoor Roth IRA will not work as intended, and will instead be mostly a conversion of pre-tax IRA balance. For those with an income high enough to need the Backdoor Roth IRA, this will result in a significant tax cost. See the main article for details.

A significant amount of Traditional IRA assets and annual contributions come from the transfer or rollover of employer retirement plan assets. These transfer/rollovers occur when an employee severs employment from the employer whether voluntarily through job switching or retiring, or through lay-offs or firings. Employees may wish to transfer an employer plan to a Traditional IRA in order to consolidate accounts, reduce plan management expense, or to retain the right to transfer the transferred assets to another employer provided plan. Transfers of Traditional IRA accounts occur in three manners:

IRA rollovers and transfers can become complicated. Refer to IRA Rollovers and Transfers for detailed consideration of this topic.

Traditional IRAs have Required Minimum Distributions that generally begin the year the account holder reaches age 72. See the main page for a discussion of the details.

Exceptions to the penalty apply if the early withdrawal is:

Contributing more than the allowed amount in any year to your traditional IRA also subjects you to an additional tax. Any excess contribution not withdrawn by the date your tax return for the year is due (including extensions) is subject to a 6% tax. You must pay the 6% tax each year on excess amounts that remain in your traditional IRA at the end of your tax year.