Thrift Savings Plan participants should be aware of IRS rules for eligible employer retirement plans and TSP-specific beneficiary rules in order to optimize their estate planning. 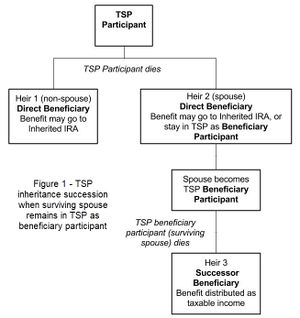 Non-spouse beneficiaries cannot maintain the TSP account. The death benefit payment will be made directly to the beneficiary or to an inherited IRA.[3]

Fran dies. Fran's beneficiary designations leave 70% of her TSP balance to Harry and 30% to Debra. Harry and Debra are both direct beneficiaries. Debra cannot hold a TSP account since she is a not the account holder's spouse, and chooses instead to rollover her death benefit into an inherited IRA. Harry, as the spouse of TSP participant, has several options as illustrated below.

Harry keeps the TSP as a beneficiary participant, and designates Debra as his primary beneficiary of his beneficiary TSP account.

Harry dies and Debra, as Harry's primary beneficiary, becomes a successor beneficiary. The TSP issues a taxable distribution to Debra.

If Harry's goal was to maximize the value of his daughter's inheritance, then this strategy is flawed because Debra must report her benefit as a taxable distribution. 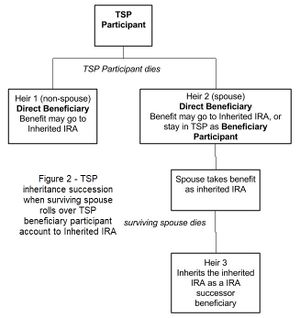 Instead of staying in the TSP as a beneficiary participant after Fran dies, Harry instead chooses to roll over the TSP funds into his IRA. Since Harry was Fran's spouse, he can transfer Fran's TSP into his own IRA instead of being required to set up an inherited IRA. At this point, the original TSP account is permanently closed.

Harry sets Debra as the beneficiary of his IRA. Upon Harry's death, Debra can establish an inherited IRA from her father's IRA, thereby preserving the tax-advantaged state of the funds.

If Harry's goal was to maximize Debra's inheritance, then this is the ideal strategy. See Figure 2 for an illustration of this scenario.

Scenario 3 - Beneficiary Participant Stays in TSP and Bequeaths to Charity

If, however, Harry is leaving other taxable assets to heirs, then Harry could arguably arrange his estate in a better way to maximize the post-tax value to his heirs, e.g. leave taxable assets to the charity (who likely will not need to pay the taxes) and leave tax-advantaged assets like an IRA (created from the TSP he inherited from Fran) to individual heirs who would have paid taxes on taxable assets.

A beneficiary participant is a spouse who inherited a TSP participant's account.

Beneficiary participants cannot do TSP transfers and rollovers into the TSP.[4]

According to the TSP, "If a beneficiary participant dies, the new beneficiary(ies) [successor beneficiaries] cannot continue to maintain the account in the TSP. Also, the death benefit payment cannot be transferred or rolled over into any type of IRA or plan."[6]

The inability of a successor beneficiary of a TSP to create an inherited IRA with his or her death benefit portion of a TSP is a significant consideration with estate planning, as it could leave the successor beneficiary with a large taxable distribution. Therefore, spousal survivors who inherit their deceased spouse's TSP may wish to consider rolling the TSP into an IRA if they wish to preserve the tax-advantaged status of these assets for their own beneficiaries; see Figure 2 on this page illustrating this scenario.[7][8]