This article contains details specific to non-US investors. It does not apply to United States (US) investors, or to US citizens and US permanent residents (green card holders) living outside the US.

For a general discussion of the effects of currency risk, see: Currency risk for non-US investors. 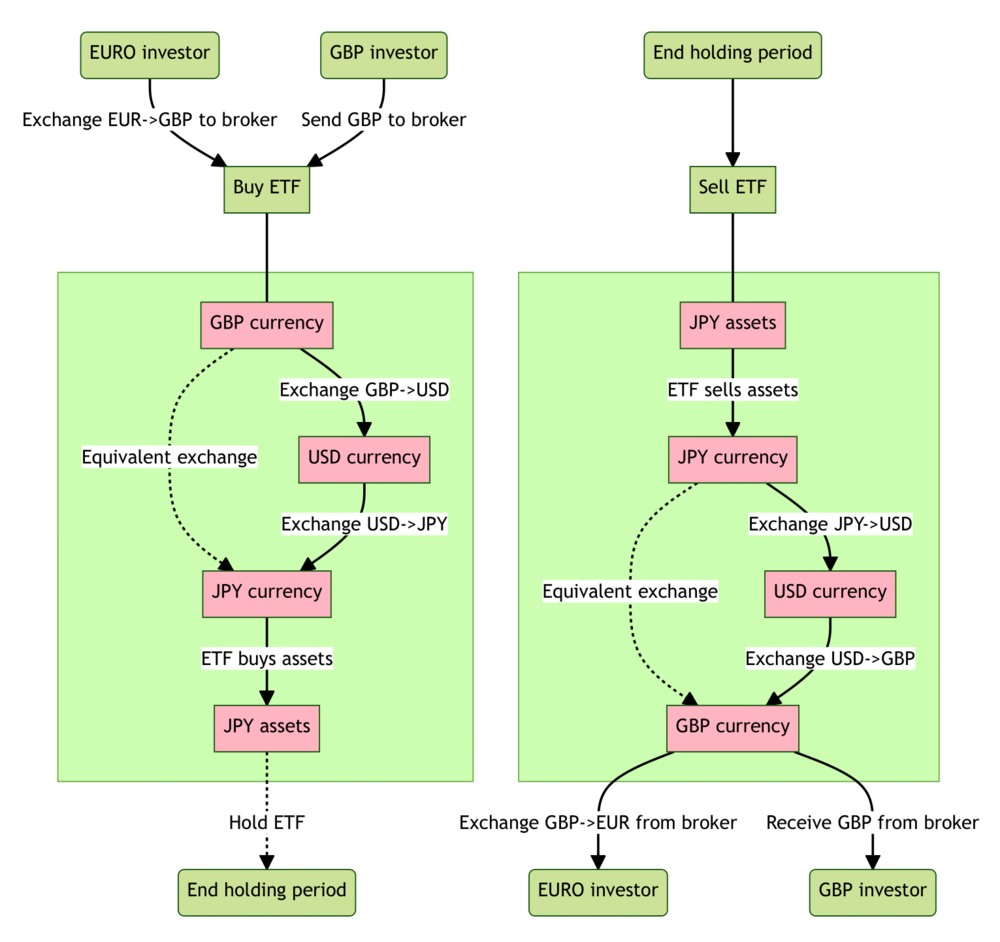 While this diagram conceptually shows the ETF provider exchanging currencies and buying or selling Japanese stocks to create or destroy ETF shares, in practice they may not -- and in fact, probably will not -- do all of these things. An ETF provider may match buyers and sellers of ETF shares, or they may use futures or options to track the Nikkei without physically holding actual stock, or any number of other actions which, taken together, produce the same effect as if the investor had bought the underlying Japanese stocks. In practice then, although some of these currency exchanges may not actually happen, you can think of them as happening anyway because it will be as if they had.

The short explanation of why all the intermediate currencies have no effect whatsoever on returns to the investor who buys an ETF holding Japanese stocks which are priced in JPY is that on purchase, the investor exchanges some of their local currency for an equivalent value of stocks priced in JPY, and on sale the reverse happens. In between purchase and sale, the investor holds only JPY assets, and any currencies that are not either JPY or the investor's own are irrelevant.

That is really all there is to it. If this is enough for you, you can stop reading now. However, some people find this explanation insufficient or unconvincing. Even finance writers and investment professionals regularly get confused over this.

Understanding that exchanging GBP to USD and then immediately to JPY is the same as directly exchanging GBP to JPY is critical. If you are not convinced by the simple statement, use your favourite currency exchange rates site to confirm it. Make sure to use mid-market rates when comparing. You can use any three currencies, not just GBP, USD and JPY. You should find that exchanging direct or via an intermediate currency produces the same outcome to within a very tight margin indeed.

To make this more concrete, here are some numbers from dates picked entirely at random. Suppose an investor buys shares of this example Nikkei tracker ETF on 15 Jan 2010 and sells on 18 May 2018.

Feel free to investigate historical exchange rates for any dates you choose, to convince yourself that it is always the case that indirect currency conversions never give significantly different results to direct ones.

This section relies on the assertion made above that an indirect exchange from one currency to another via an intermediate third currency is indistinguishable from a single exchange directly between the starting currency and the end currency.