Mean reversion in finance has a different meaning from regression to the mean in statistics. The language used by writers we shall cite clearly implies a compensating effect, not simply the effect of statistical regression to the mean, nor of the law of averages. The clearest expression of this is Jeremy Siegel's description of stock market returns as "clinging" to a trend line and being brought down by "forces" of mean reversion.

According to Balvers & al. (2000), "Mean reversion refers to the tendency of asset prices to return to a trend path." Ho and Sears (2006) state that

Jeremy Siegel's influential book, Stocks for the Long Run, refers to "remarkable stability" in long-term returns. He says the stability is "called the mean reversion of equity returns, which means that returns can be very unstable in the short run but very stable in the long run." He says returns as "clinging" to a "statistical trend line," and states that after 1990 "forces of mean reversion eventually worked to bring total returns down." More formally, he states, as evidence for mean reversion, data showing that the "risk for average real return" of stocks declines with holding period at a rate that is faster than would be predicted by a random walk hypothesis: 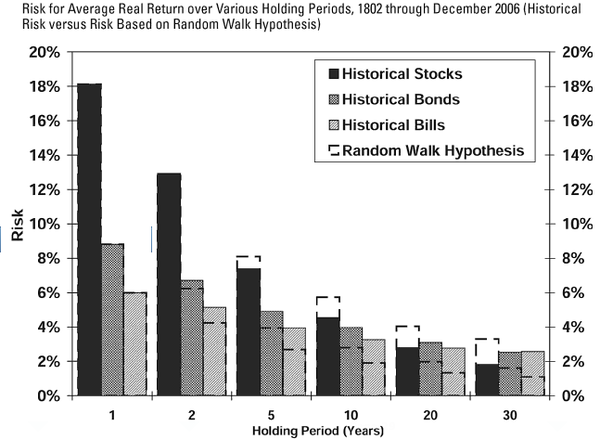 John C. Bogle regards mean reversion (or RTM, reversion to the mean, as he calls it) as an important factor affecting all investments. In a 2002 presentation entitled The Telltale Chart (with an updated version included in his 2010 book, Don't Count On It!), he states that RTM is widespread and "can help us to understand financial markets and thereby become more successful investors." (He does not explicitly define the term in that presentation, and it is not perfectly whether he regards RTM as an active compensatory process, or a mere failure of persistence).