This article contains details specific to investors in Spain. However, it does not apply to residents of Spain who are also United States (US) citizens or US permanent residents. 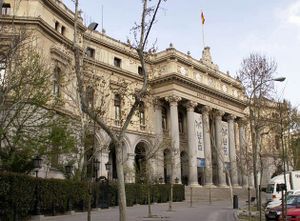 The Bogleheads® investment philosophy can be used by investors resident in Spain, as long as they are aware of the specifics that come with their domicile, some of which are discussed in this article.

Please seek advice in the Bogleheads forum and contact a professional advisor before acting on them. The general guidance given in Bogleheads® investing start-up kit for non-US investors, Investing from outside of the US and EU investing is applicable.

Investing with Vanguard in Spain

Starting in 2015 Vanguard Ireland opened its doors to investors in Spain. Compared with US offerings there are a smaller selection of exchange-traded funds (ETFs) and some index funds, all of which require a minimum of a 100,000€ investment:

If you are a personal investor enquiring on your own behalf, please be aware that we do not pro-actively market, distribute or service direct investors. However if you are resident in one of the countries listed below you are able to invest in our Irish mutual fund range, on an execution only basis, subject to a minimum investment per fund of €100,000 or equivalent.

A number of low-cost comercializadores de fondos make index funds available to retail investors in Spain — bypassing the usual fund minimums by creating so called "omnibus" accounts with portions of the holdings parcelled out to individual investors — including:

Accounts with other brokers based outside Spain, such as Interactive Brokers (UK), can be used to purchase ETFs, but they do not automatically report earnings to the Spanish tax authorities, requiring investors to file Form 720 themselves.

Starting in July 2018, BNP Paribas began charging 5 basis points each quarter, plus tax (the IVA tax of 21%) — effectively totalling over 6 basis points charged quarterly in additional fees — to customers with a majority of their holdings in so called "Clean" funds (such as the Ireland-domiciled Vanguard funds).[2] This makes the effective expense ratios of these funds less competitive, leading some investors to keep them only as a minority portion of their portfolio.

Tax is not due on dividends that are reinvested (recapitalizados), a useful property for investors wishing to minimize their taxes. When reinvesting, tax is payable only on the capital gain (plusvalía) at the eventual time of liquidation. As such, investor demand has led to the availability of many funds and ETFs in "acumulación" format — these reinvest the dividends internally — in contrast with so-called income or distributing ("distribución") funds and ETFs.

Income tax rates vary by region (comunidad autónoma). The tax brackets and rates in 2017 for Madrid, for example, are:[3]

Index funds may be exchanged without triggering a taxable event, thus removing the tax consequences of rebalancing. It is possible that legislation may bring the same treatment to ETFs in the future, but at the time of writing (August 2018) this is still not the case.