An immediate fixed annuity represents a fixed sum of money paid to someone each year, typically for the rest of their life. Modern annuities are financial contracts between an individual and an insurance company. You give the company money now and the company pays you an income that starts almost immediately.[1]

An immediate annuity is often designated as a Single Premium Immediate Annuity (SPIA) or an income annuity to differentiate it from a deferred annuity. Income annuities can be fixed or variable. The payments from fixed income annuities discussed here, unless they are graded, or inflation-indexed, will remain fixed over the distribution period.

Income annuities are designed to insure an individual against the risk of outliving an income stream during the withdrawal phase of the life cycle. The payout from the annuity will reflect the following factors.

It is important to understand that the payment streams from an income annuity consist of both income and principal, so the payout percentages are not comparable to the yields of fixed income securities or dividend yields from stocks. The payout is comparable to the percentage withdrawal rates of a systemic withdrawal. You can determine the actual yield of the annuity payout by using the google spreadsheet included in the external links below. The yield of the income annuity investment will increase as the term of payout increases.

In the U.S. annuitization of retirement assets is quite low. According to 2010 TIAA-CREF surveys, only 11% of U.S. citizens had annuitized nest eggs. [6] Among college and university employees investing in TIAA-CREF retirement plans, some 34% planned on annuitizing or partially annuitizing their contributory retirement plan accumulations at retirement. [7]

Inflation risk should be a major consideration when evaluating a fixed annuity income option, since inflation will reduce the purchasing power of a fixed income stream over time. Figure 2. shows the eroding purchasing power effect of a 3% inflation rate over time. If one is thinking of using a fixed annuity payout to cover two to four decades of retirement income one should consider using inflation indexed income annuities or a graded income annuity with a higher (3% or 4%) annual income adjustment. 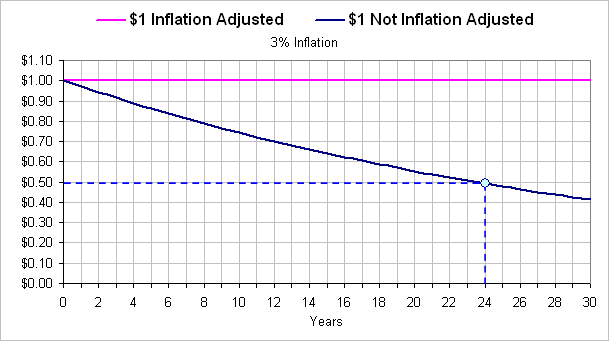 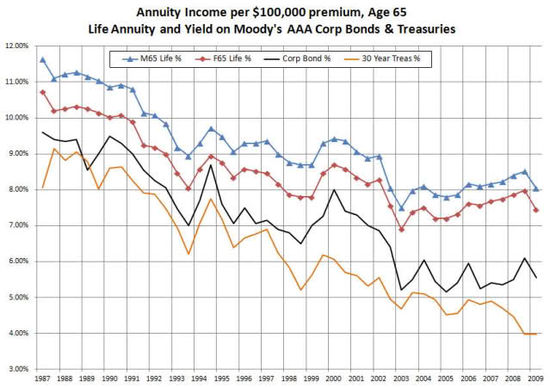 Fig.3. Re: Rates on Annuities

In the U.S. fixed payment income annuities have existed since 1759, although the market was quite small until the Great Depression.[8] TIAA introduced fixed annuities in 1918. [9] According to research from TIAA-CREF, the fixed payment option is the most frequently chosen life annuity option chosen by the firm's retirement plan owners.

Since a fixed payment annuity does not provide for an escalating future income stream, its initial income payout will be higher than a similar graded payment or inflation indexed payment. The necessary tradeoff for the higher initial payment is that the income stream will be eroded by inflation over time. This lack of inflation hedging should be a major concern for younger annuitants, since long expected payouts can be seriously eroded by inflation The lack of inflation hedging may not be as much an issue for investors making an annuitization late in the life cycle (circa age 80) with shorter life expectancies. For these annuitants, inflation is expected to have less time to compound, and there would be less time for a rising graded or inflation index payment stream to match or exceed the higher fixed income payment.

Figure 3. shows the fluctuation of fixed income annuity rates from 1987 to 2009. The data tracks income annuity payout rates for both 65 year old males and 65 year old females in comparison to interest rates on corporate and treasury bonds. While the direction of payout rates tends to track interest rates it is important to note that SPIA payouts rise and fall less, proportionately, because SPIA pricing is based in part on mortality which is unaffected by interest rates. Thus even when the interest rate is low it can be advantageous to go ahead with an SPIA purchase, because the lowness of interest rate hurts investment opportunity for money held out of SPIA more than it hurts payments received from the SPIA.

With a graded payment method, an annuitant receives an initial annual income payment which is subsequently increased by either a preselected set amount, or by an amount in excess of a targeted investment rate. Graded payment methods for fixed income annuity payouts were introduced by TIAA-CREF in 1982.[10] TIAA bases the initial income on a 4% payout rate. TIAA reinvests excess earnings to buy additional future income. Increases to the annuity income occur as long as the TIAA total total interest return exceeds 4%. [11] Vanguard's Annuity Access program offers graded income payments providing for 1%, 2%, 3%,or 4% annual rates of increase. The higher the selected payment increase percentage, the lower the initial income payment.

Graded payment methods allow for an income stream that will increase over time. As long as the increases match or exceed the inflation rate the annuitant will have achieved some protection of purchasing power. 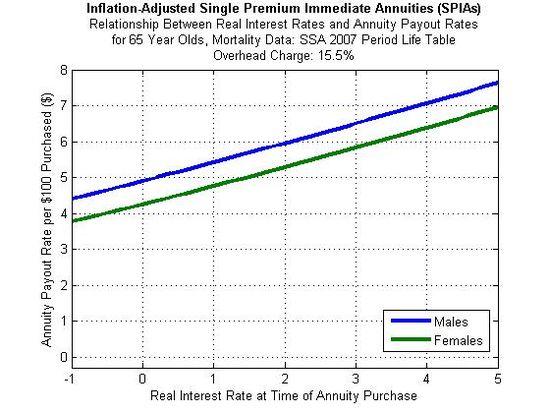 As table 4. indicates, the initial payout from an inflation indexed annuity will track the level of real interest rates at the time of purchase.

Inflation indexed annuities are priced to produce lower initial levels of income than those provided by fixed income annuities. According to research provided by Schirripa (2009), [12] this reduction results in a 26% lower initial income for a 65 year old male, and a 28% reduction for a 65 year old female (the reductions are somewhat higher at age 60; somewhat lower at age 70). The point at which the lower inflation indexed initial payment will match and exceed the nominal fixed payment will depend on the ensuing inflation rate. At a 4% inflation rate, the inflection point is approximately 8 years; at a lower 2% inflation, the inflection point is much later, circa 17 years.

Huang and Milevsky [13] point to an additional consideration about inflation indexed income annuities. Retiree costs tend to track the health care and housing cost components of the CPI-U. These costs often rise faster than the CPI-U, so the annuity income stream may not offset an individual's personal inflation rate. As a possible means of offsetting higher inflation, Milevsky and Chen (2003)[14] and Walsh (2002) [15] advise adding an allocation of a low-cost, immediate variable annuity to an individual's product allocation plan.

Fixed immediate annuities receive a degree of tax relief (for non-qualified dollars) due to the income exclusion rules. The IRS allows the investment in the contract to be recovered over the annuitant's life expectancy. The calculation of the Exclusion Ratio is made according to the General Rule (found in IRS Publication 939 General Rule for Pensions and Annuities. The annuity payments will be partially taxable due to the exclusion over the recipient's life expectancy. After this term. the full income payment will be taxed. If the owner dies before the total investment in the contract is recovered, and annuity payments cease as a result of his death, the un-recovered amount is allowed as a deduction to the owner on the final tax return.

In case of insurer default, your State Guarantee Fund will attempt to find a replacement insurer for your contract, and will offer insurance on a given amount of annuity investment (usually up to $100,000, but greater in some states). Keep in mind that the State Guarantee Funds are not obligations of the federal or state governments but are funded by assessments placed on insurance companies that sell policies in your state. The following links provide information on state guarantee limits, as well as what happens as a consequence of an insurance company failure.

The question of whether or not to annuitize a nest egg will depend on individual circumstances. The following factors will help show under what circumstances an annuitization will be more or less suitable or unsuitable.