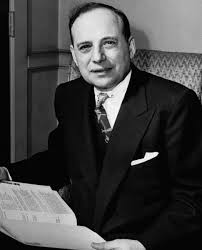 Finance professor Benjamin Graham (1894-1976) was the mentor of Warren Buffett, and coauthor of the influential textbook, Security Analysis. His book for ordinary investors, The Intelligent Investor, appeared in 1949 and went through subsequent editions up through 1973. In this book, Graham gave a widely-cited piece of advice on asset allocation. The advice can be summarized in his words:

"the investor should never have less than 25% or more than 75% of his funds in common stocks."

Graham distinguished between the "enterprising" investor with "willingness to devote time an attention to securities that are more sound and more attractive than the average," i.e. to beat the market, and the "defensive" investor who "will place his chief emphasis on the avoidance of serious mistakes or losses. His second aim will be freedom from effort, annoyance, and the need for making frequent decisions." In short, the Bogleheads investment philosophy is like that of Graham's "defensive" investor.

In The Intelligent Investor, Graham recommends 50/50 as the standard allocation:

We are thus led to put forward for most of our readers what may appear to be an oversimplified 50–50 formula. Under this plan the guiding rule is to maintain as nearly as practicable an equal division between bond and stock holdings. When changes in the market level have raised the common-stock component to, say, 55%, the balance would be restored by a sale of one-eleventh of the stock portfolio and the transfer of the proceeds to bonds. Conversely, a fall in the common-stock proportion to 45% would call for the use of one-eleventh of the bond fund to buy additional equities.

We have suggested as a fundamental guiding rule that the investor should never have less than 25% or more than 75% of his funds in common stocks, with a consequent inverse range of between 75% and 25% in bonds. There is an implication here that the standard division should be an equal one, or 50–50, between the two major investment mediums.

He is equivocal about what is now called "tactical asset allocation" (varying stock exposure in response to market conditions):

According to tradition the sound reason for increasing the percentage in common stocks would be the appearance of the “bargain price” levels created in a protracted bear market. Conversely, sound procedure would call for reducing the common-stock component below 50% when in the judgment of the investor the market level has become dangerously high. These copybook maxims have always been easy to enunciate and always difficult to follow—because they go against that very human nature which produces that excesses of bull and bear markets....

we can give the investor no reliable rules by which to reduce his common-stock holdings toward the 25% minimum and rebuild them later to the 75% maximum.

All quotations are from The Intelligent Investor, Rev. Ed, by Benjamin Graham, ed. Jason Zweig, HarperCollins, 2009, and are taken from the parts of the book that reproduce the 1973 edition. (The book also contains extensive added commentary by Jason Zweig).