While CDs are often thought of as different assets than bonds, in reality they are simply bonds with special characteristics. These differences and similarities will be explored below.

Because CDs, like U.S. Treasuries, are backed by the full-faith and credit of the U.S. Government (when purchased properly), Treasury Bonds are the appropriate comparison.

The following primarily applies to un-brokered CDs of greater than 1 year maturity, with no particularly exotic options (e.g. a simple coupon-paying CD with no call option). As this is by far the most common type of CD, and is what most people mean when they say "CD," this will allow the analysis to be simple yet relevant.

In general, assuming yields are equal, CDs perform better if interest rates rise (because of their put option[1] and because if the bank fails you get the par value back, not the lower present value), whereas Treasuries are preferred if interest rates fall (since their liquidity means you do not have to wait until maturity to profit from the rate change and because if the bank fails you get their higher present value back rather than the par value) . However, as noted below, CDs seem to yield more than Treasuries in most market environments for the reasons discussed there.

Because CDs cater primarily to the individual investor market, whereas Treasuries can be traded in large volumes by institutional investors as well, and because the characteristics of the bonds differ (particularly with regards to taxation, liquidity and options), yields on Treasuries and on CDs are never exactly alike.

Market data for CDs can be difficult to come by, because for the individual investor a little time searching can often yield above-average rates in the CD rate. Nevertheless, the data presented below is likely a good first approximation of the historical behavior of the two bond categories, at least for ultra-short maturities. The data shows that on average 6-month CDs had higher yield than 6-month Treasury Bills. Longer issues may behave much differently, because the options and liquidity differences become more pronounced over longer holding periods. 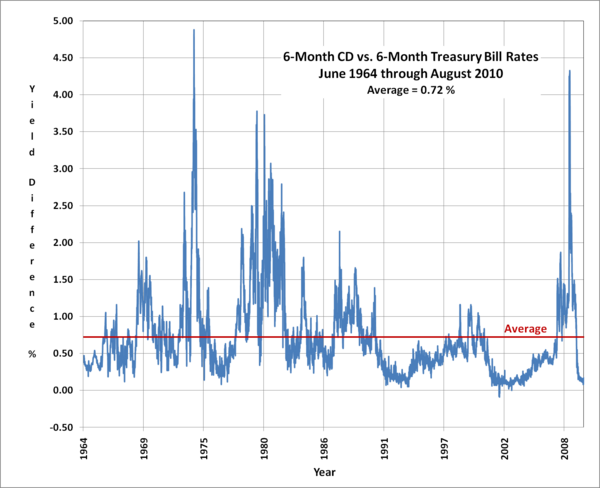