It's my honor to wish you a Happy 99th Birthday, along with so many here, at our very special, Bogleheads site.

(Although your birthday is January 25, I'm posting this two days early to make sure, all who would like
to add their birthday wishes can do so, and not miss your special day.)

So many people continue to look to you for wisdom, both in regards to investing, and how to live a life of heroic convictions, set by your fine example.

"Thank you," seems like such a small sentiment, but that's all we can give you, for your bravery and courage, dating back to WWII, when you were so very young. When many people of nineteen or 20 years of age from future generations would be sweating over being enrolled in the classes of their choice for college, or agonizing over how many, "followers," they have on the various social media platforms, you were a paratrooper in the 101st Airborne Division, proudly known as, "The Screaming Eagles," during, "The Battle of the Bulge."

I mean, "Wow!" You were THERE! If that doesn't leave people in awe, I don't know what will. Most of us only know about this battle from our online searches, or history books. I'm writing this brief summary for a review for those of us who studied this, and for some of our younger Bogleheads who might not be
familiar with this epic Battle during WWII.

(Taylor, please set me straight should I get anything wrong.)

"The Battle of the Bulge," was a German offensive to try to split the Allied troops in half and try to capture, Antwerp, a key port city in Belgium, during World War II.

Taylor and his division were deployed to the town of Bastogne, to defend it, because it was an important road junction, and Bastogne's capture would have allowed the Germans to move further into Belgium.

Taylor's, 101st Airborne Division, along with other units, were surrounded by the Germans and cutoff from supplies. Even though Taylor's group, and the other Allied units were outmanned, and outgunned, they, "Held the Line," and Bastogne, was NOT captured by the Germans.

The 101st Airborne Division, also engaged in a counter-offensive, to push the Germans back, by disrupting the Germans communications, and slow them from advancing, by attacking strategic targets, which gave the Allied troop time to bring in reinforcements. The 101st Airborne Division, attacked roads and rail bridges, German command centers, fuel and ammunition centers, and power plants.

The 101st Airborne Division lost many men, but mercifully, Taylor was spared. No one knows how long we have on the Earth, but it seems so clear to me, that Taylor has always been here to help the people who have the honor of knowing him, from his earliest years, to the present. This is what a life of service looks like.

Again, Happy 99th Birthday to you Taylor. You are a living legend, and an American hero to so many of us, on so many levels.

With love, and admiration,

My grandma lived to 107.5 and was fully with it for all of it. I challenge you to keep posting on Bogleheads until at least 108.

Have a great day... know you have made a difference in lots of corners of the world!
| Rob | Its a dangerous business going out your front door. - J.R.R.Tolkien
Top

Read your book last year and its already turned my life around. I took control of my finances and unleashed the wealth building power of my income because of your advice. Cheers!
Top

Mr. Larimore, Happy Birthday!! (in advance). Words cannot express the gratitude of your service but please know that you played a part in many ways in changing the world for the better.

Ms. Ryan, Thank you for the excellent write-up and information!!
Taking care of tomorrow while enjoying today.
Top

Congratulations, Taylor!
With deep appreciation for all you have done for so many for so long.

He helped me on the old Morningstar boards when he was just a wee 82 year-old and I wouldn't be in the same position today without his kind and simplifying advice.
Top

Happy birthday Mr. Larimore! Thanks for sharing your wisdom.
Top

Happy Birthday!
"The fund industry doesn't have a lot of heroes, but he (Bogle) is one of them," Russ Kinnel
Top

Thank you so much for sharing the message about low-cost investing as you have helped me so much.
Top

Always a gentleman and a mentor. . from a generation of heroes.

Bogleheads Wiki: Everything You Need to Know
Top

Taylor, you continue to inspire me!

Wow! I continue to be impressed by this man. Happy 99th Taylor!

Happy birthday! I had no idea you were 99! What great health and influence you've been to me! Thank you sir and wishing you another year of health!
Top

Happy birthday, Mr. Larimore!
Retirement is best when you have a lot to live on, and a lot to live for. * None of what I post is investment advice.
Top

Happy Birthday! I aspire to be more like you.
Top

Happy Birthday, Taylor! Thank you, as I've said and meant a million times, for all that you've done for our country and have done and continue to do for investors all over the country through Bogleheads.org. We appreciate you!
Top

Taylor- thank you for all of your amazing and wonderful contributions to this world. Happy birthday!
Top

I am always looking forward to reading any of your posts.

Having the opportunity to 'lurk' on the forum and learn from you has literally changed my family's financial life. I admire not only your expertise, but also the patient, thoughtful way you share it. I wish you every good thing on your birthday!
Top

Happy Birthday, Taylor. Thank you for all you have done for our family and this community.
Top

Happy birthday, Taylor!
I wish I knew sooner. I would have gotten you a little something. LIke a Harley. Or a villa in the south of France.

Thank you for your dedicated service, both to the cause of freedom and democracy, and to this community.
Top

You continue to be a positive force and inspiration in my family's life. Thanks for your service and I wish you all the best.

Happy birthday, Taylor! You have made a big impact on my life and that of my family, thank you!
Top

Congrats, Mr. Larimore! For a life so beautiful!!!
Top

Happy Birthday Taylor! Thank you for spreading your wisdom.
Top

Salute to a great man on his Birthday!

Happy Birthday Taylor! Very grateful for all the wisdom you share.
Top

What a wonderful Happy Birthday, Taylor! You and Mr. Bogle have made all the difference in my family's successful financial life 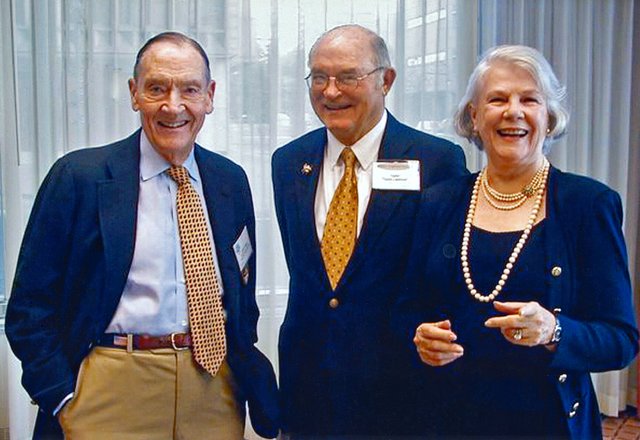 Happy birthday Taylor. Thank you for your really valuable and amazing posts on this forum.
Top

Happy 99th Birthday, Taylor Larimore! It has been an honor to learn about you and from you through your many posts and writings.

Happy Birthday Taylor and thank you.
The fool, with all his other faults, has this also - he is always getting ready to live. - Seneca Epistles < c. 65AD
Top

Happy Birthday!
While the moments do summersaults into eternity | Cling to their coattails and beg them to stay - Townes Van Zandt
Top

Return to “US Chapters”