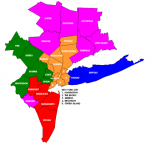 The current New York City Bogleheads® local chapter began its third incarnation in 2016.
The  New York chapter was created in 2005 when it was known as the  NY/NJ/CT Metro Diehards chapter. The chapter met continuously,  holding three or four meetings annually from 2005 into 2012. The chapter met in White Plains New York.
The second incarnation of the chapter began on May 27, 2013. Quarterly meetings were held into 2015.

You can read about New York City local chapter meetings during this period  here.

The chapter meetings during the NY/NJ/CT Metro Diehard were held at Camille’s Cafe, Bank St., White Plains, NY. Subsequent chapter meetings have been held at the Sony Atrium at 550 Madison Ave. and the Signature Theater cafe seating area at 480 West 42nd Street.