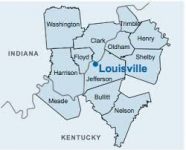 The Louisville Bogleheads® local chapter (also referred to as the Derby City chapter) was formed on July 24, 2015.  The chapter held its first meeting on  September 10, 2015.
The chapter has met subsequently on two occasions: