A previous blog article explored income-centric risk and reward definitions, which could be viewed as more suitable to retirement than the usual academic definitions. Corresponding quantitative analysis of some simple US portfolios was provided. A follow-up article explored the perspective of retirees located outside the US.

This article extends this investigation by exploring in more technical depth the tie-in between Safe Withdrawal Rates (SWR) and variable withdrawal methods, through the use of a clever metric named Withdrawal Efficiency Rate (WER).

The WER metric was introduced by David Blanchett in this article, with the formal definition in appendix 1. Please check this appendix if you want to follow the rest of the discussion in details.

Blanchett started by observing that if we had perfect foresight, we could compute the Safe Withdrawal Rate (SWR) for a given sequence of returns, and then simply perform fixed withdrawals from the initial portfolio using such ‘ideal’ rate. Note that Blanchett uses the Sustainable Spending Rate (SSR) terminology instead of SWR.

Then the fundamental idea is to start from a given sequence of withdrawals (computed based on a given withdrawal method, for a given retirement period), and use a utility function to compute a “Certainty Equivalent Withdrawal” (CEW), i.e. a fixed withdrawal that would have had the same “utility” as the variable withdrawals being modeled. The utility function (a standard function called constant relative risk aversion) will capture the risk aversion of typical retirees about their income, penalizing low withdrawals more than rewarding high withdrawals. Then it is a simple matter of comparing the CEW quantity to the Sustainable Spending Rate (SSR in Blanchett’s terminology), i.e. the Safe Withdrawal Rate for this specific retirement cycle, and divide one by the other to obtain the WER. A score higher than 90% is really good!

Practically speaking, such math can easily be implemented in spreadsheets by doing the utility and CEW math based on the sequence of withdrawal % (i.e. the withdrawal amount normalized by the initial portfolio balance, expressed in real terms) to compute the Ci terms of the equation. Here is a link to a Google Sheet showing how to perform such WER calculation (in an incremental, then more compact manner), and illustrating the basic dynamics through a couple of graphs.

To illustrate a variable withdrawal method, we will use a simple asset allocation (70% US stocks, 30% US bonds), a retirement period of 30 years, and show the trajectory of the portfolio in nominal $ (to better appreciate the emotional risk of drawdowns) and the trajectory of the withdrawals, expressed in real inflation-adjusted $ (to better appreciate the corresponding purchasing power over time).

Let’s use an actuarial method, centered on the use of the PMT() function. The VPW method, described on this Bogleheads wiki page, is a simple instance of such method, which boils down to withdrawals being computed every year as PMT(rate, #periods, -portfolio$, 0, 1) where:

This method is comparable to a fixed withdrawal based on the SWR (established in hindsight) of the corresponding retirement period, since both end up fully depleting (i.e. spending) the portfolio. Note that most other withdrawal methods do not have such property (which may not be desirable for the retiree, actually).

To be more realistic, we’ll combine those variable withdrawals with a separate source of income, let’s say social security and a fixed $20,000 (inflation-adjusted) every year. Both sources of income added together make for an annual spending budget, which we’ll display.
Here are three examples of retirement periods, one starting in 1955 (mild times to come), one starting in 1965 (tough times to come), and one starting in 1975 (rosy times to come). As you can see, the trajectories differ quite a lot, and the variability of withdrawals along the way is quite significant. The VPW trajectory (blue line) is compared to the ‘ideal’ trajectory based on the SWR computation in hindsight, with constant withdrawals (the CDW line). 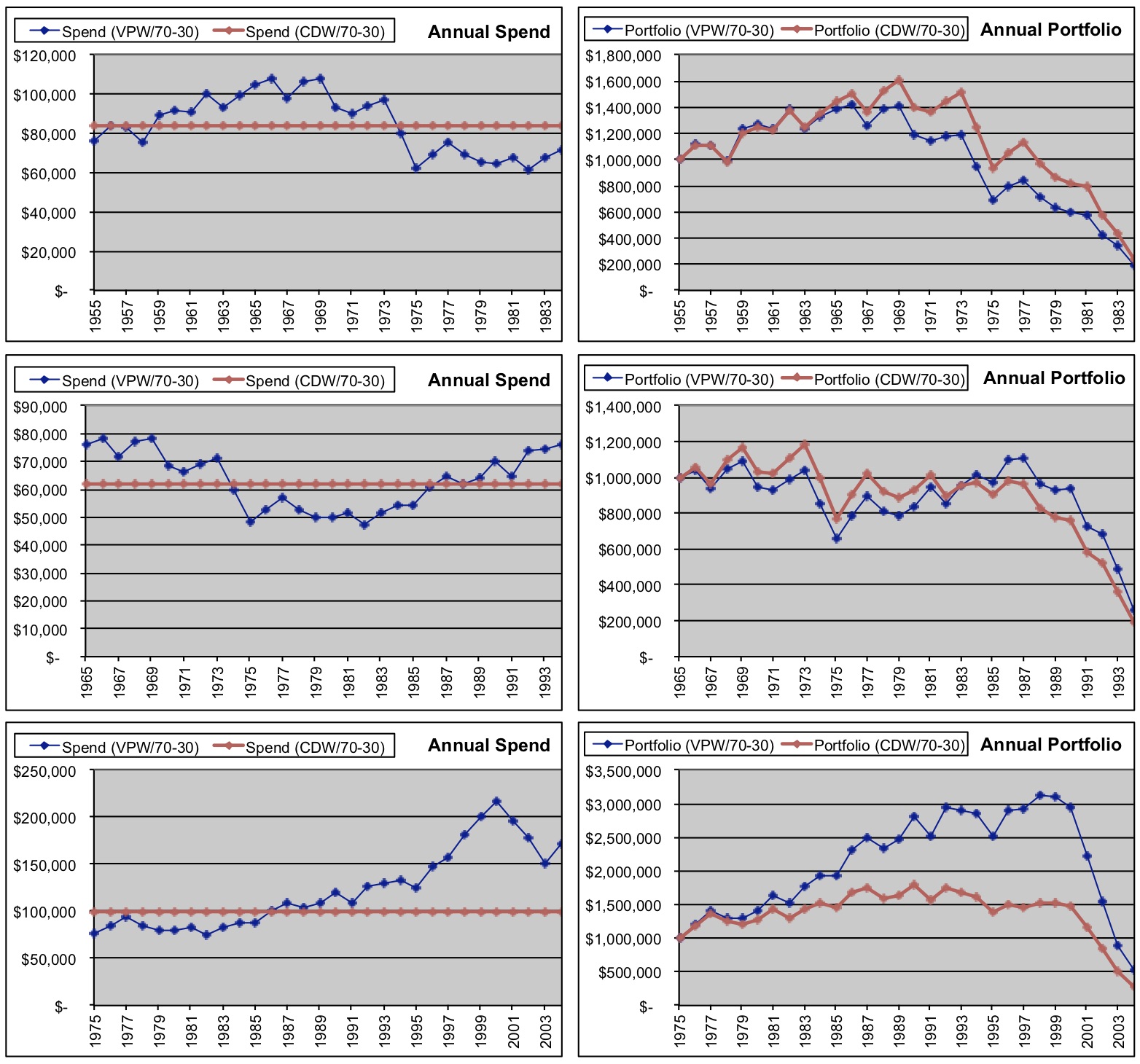 Visually, we can easily appreciate that the VPW withdrawals do seem to approximate the CDW line on average, albeit with quite some variability around it. As to the portfolio value, this is the usual roller coaster, with quite a drawdown during the oil crisis, of course. Note that in all cases, the year after the last withdrawal, the portfolio is fully depleted, by design of the VPW and SWR withdrawal formulas.

As was briefly explained in the first risk/reward article, it turns out that the WER scores obtained by some variable methods can get close to the ideal 100%. This is quite remarkable because the SWR math is performed in hindsight, while the variable withdrawals are computed WITHOUT foresight, and as we’ve seen in the previous section, things can evolve in very different ways, in a truly unpredictable manner. To quote David Blanchett:

The higher the WER, the more efficient the strategy. A higher WER value means the retiree was able to capture a higher percentage of the available income had he or she had perfect information when retirement commenced.

As we’ve seen in the first and second risk/reward articles, this line of thinking gave us a remarkably simple way to assess the (past) properties of a given Asset Allocation, by just backtesting past retirement periods and graphing the SWR outcomes. Then we know that, if a retiree has used a sound variable withdrawal method, the income could have been pretty close to the SWR outcome, at least on average.

Now, let’s check this assertion. First, let’s take the 1955/65/75 starting years again with the VPW withdrawal method, and compare three asset allocations (30/70, 50/50, 70/30) and the corresponding WER scores. In addition, let’s look at the SWR of the corresponding retirement period, the average spending budget, and an additional metric (the average spend minus its own standard deviation, to get a better feel about the variability of withdrawals). 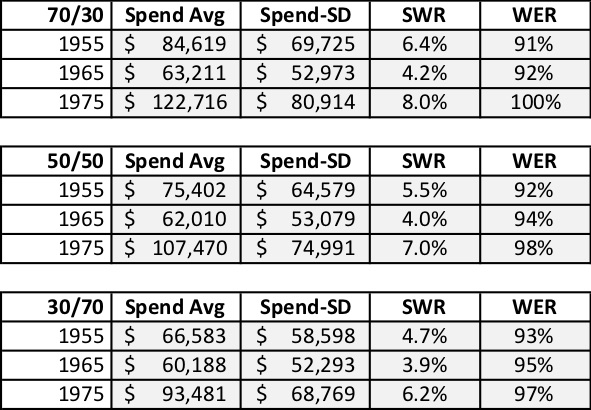 As you can see, the results are very robust across a large number of retirement periods and very distinct asset allocations. The author performed other tests, with an international allocation and/or with a value tilt, and the results are basically the same. This reinforces the finding that the withdrawal method does a really good job of adjusting to various conditions.

Reflecting on other withdrawal methods

The previous tests clearly demonstrated that the SWR charts provided in the previous risk/reward articles were strongly indicative of the income one would receive by using a sound withdrawal method like VPW. And even if one might not exactly capture 100% of the Safe Withdrawal Rate in every case, the results are robust enough to conclude that such SWR analysis is a very solid test on how a given asset allocation would have performed in the past when combined with such a withdrawal method.

Now, what about other variable withdrawal methods that a retiree might choose to fulfill goals for which VPW is a poor match? Aiming at depleting the portfolio might not desirable. The fairly high variability of withdrawals might not be desirable. Etc.

The methodology presented so far worked remarkably well because both the SWR math and the withdrawal method being used (VPW) were deterministically depleting the portfolio at the end of the retirement period. If one were to select a method that does NOT do that (Guyton-Klinger decision rules as an example, which emphasizes much more the stability of annual withdrawals), then of course the withdrawals will get lower, and the WER score will suffer. What does that tell us?

Clearly, choosing a withdrawal method is a strongly personal choice, and there is no one-size-fits all approach in anything related to personal finance. A lower WER score might be a direct consequence of deliberate choices being made by the retiree, and this is nothing wrong with that.

The author ran a series of tests with a couple of alternate withdrawal methods, across multiple types of asset allocation (from 30/70 to 80/20). Long story short, a fundamental finding always held true. The product of the SWR by the WER (i.e. the CEW) always increased with the exposure level to stocks. In other words, the actual income that the retiree would have extracted from the starting portfolio increased with higher stock exposure. So did the portfolio ups and downs and the corresponding emotional risk, mind you. Again, those are deliberate choices.

Based on the analysis performed in the risk/reward article part 2, the author doesn’t expect that this finding would be 100% true for the known history of all developed countries, but it would undoubtedly be true for the great majority of cases IF the portfolio was widely diversified beyond the home country. In other words, irrespective of the choice of withdrawal method, the SWR charts are indicative of relative risk and reward, when comparing asset allocations.

This third article on risk/reward was significantly more technical than the previous two, and we probably lost a few readers in the process… The point was not to come up with new findings, but simply to justify in more details why the reasoning used in the first two articles (tying together SWR, WER and variable withdrawal methods) appears to be based on a solid foundation.

The bottomline is that variable withdrawal methods clearly benefitted from high stock exposure if the financial goals of the retiree were income-centric, and if the retiree was ready with deal with levels of variability in both income and portfolio value. It doesn’t seem a big leap of faith to expect similar outcomes in the future.

Analyzing past SWR outcomes (in hindsight) is very informative, as it embodies key factors impacting the trajectory of income (e.g. cumulative growth and sequence of returns). Some withdrawal methods would have been able to consistently extract nearly as much income (to the cost of income variability) as the SWR (in hindsight) indicates. Others may have delivered by design less income (e.g. to the benefit of improved stability of income), but the SWR analysis continues to provide a solid indicator of which asset allocations would have been more optimal, income-wise.