This article provides updated Telltale charts, including 2017 returns. It focuses on the relative past performance of value and size factors compared to the total US market, as well as studying international and real estate funds.

Using Telltale charts can be very informative, truly ‘telling the tale’ of what happened over time to portfolio trajectories, illustrating return to the mean properties, or lack thereof.

The following introduction comes from the Bogleheads wiki page about Telltale Charts.
In June 2002, John Bogle published his seminal article titled “The Telltale Chart”. In this article, he began by:

…criticizing the vastly over-simplified but typical way we look at long-term results. We hear, for example, that “small-cap stocks outperform large-cap stocks by almost two percentage points a year,” […] without acknowledging that each and every comparison we see is period-dependent. Whether or not the period has been selected to prove a point, neither the starting date of a comparison nor its concluding date are random.

He was referring to typical growth charts, which are indeed very sensitive to start and end dates, and tend to hide the periods of time that make a big difference to the trajectory. He then suggested the following:

Mathematically speaking, this is a simple way to normalize performance and to display it in a relative manner. Telltale charts are very handy because they allow to see on the same visual the overall cumulative trajectory (from start to end) AND what is happening year over year, therefore allowing one to grasp the big picture as well as the underlying dynamics. It takes a bit of effort to get the hang of it, but it is really worth it.

Simba’s backtesting spreadsheet describes a spreadsheet originally developed for the purpose of acting as a reference for historical returns, and analyzing a portfolio based on such historical data.

In the spreadsheet, Telltale charts allow to compare the trajectory of historical returns for the various portfolios of interest to a Telltale benchmark (itself a portfolio), in a relative manner. It is interesting to observe that growth charts are actually a special form of telltale charts, and can be generated by the same tool.

The graphs provided in this article have been generated by using a customized version of such a spreadsheet, based on version 17b. Data sources are documented in the spreadsheet.

The following Telltale chart compares the trajectories of portfolios made of a single (US) asset class, namely Large Cap Value (LCV), Mid Cap Value (MCV), Small Cap Value (SCV) and Small Cap Blend (SCB), while the Telltale benchmark is the US Total Market (TSM). Therefore the charts display the growth of an initial investment, relative to the growth of the US total market.

The leftmost chart shows the relative trajectory in recent decades, since 1970, of an initial investment of $100. Note that the vertical axis is linear, for better readability. The rightmost chart shows the trajectory since 1927. Note that the vertical axis is logarithmic, to ease the comparison between time periods. Click on the image for a larger display.

To further illustrate some capabilities of the Simba spreadsheet, let’s look at a couple of additional charts illustrating the past performance of those asset classes.
The first chart compares standard deviation (volatility) as one possible measure of risk to returns (nominal) for the 1970+ time period. The second chart illustrates commonly used risk ratios (please check the Simba spreadsheet’s glossary for definitions and pointers to more literature). Both charts further illustrate the excellent track record of MCV and SCV. 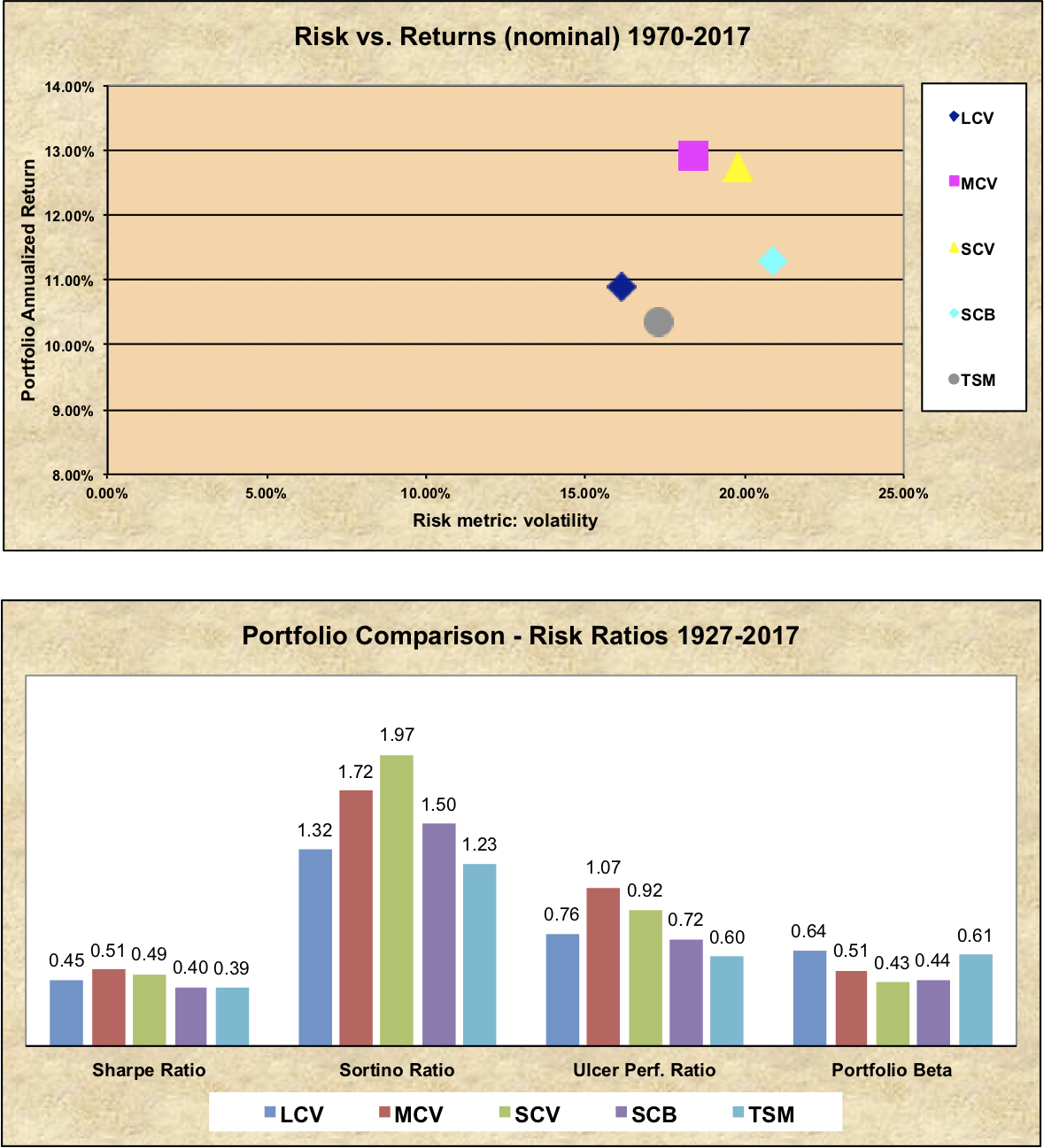 Since both MCV and SCV asset classes displayed such impressive performance in the past, let’s look at the corresponding trajectory under a different angle, with more realistic portfolios. Let’s use as a benchmark portfolio the traditional 60/40 portfolio (60% Total-Market, 40% Total-Bonds), US only.

Here are the portfolio drawdowns (based on annual returns, so this ignores intra-year events), comparing a 60/40 portfolio where we replace TSM by either MCV or SCV. The SCV drawdowns were a bit deeper. Also note the interesting trajectory during the Internet crisis (2002), where TSM fell hard, while MCV and SCV’s fall was much milder. Unfortunately, this didn’t occur again during the financial crisis that followed (2008/09).

Now let’s look at all 30-years cycles which occurred between 1927 and 2017, plotting the starting year as the horizontal axis, and looking at the real (inflation-adjusted) CAGR. The pink dots (TSM as stocks) were always below the blue dots, without a single exception. And in the case of the MCV 60/40 portfolio, the premium was quite remarkably consistent, between 1% and 2% in most cases.

There was a price to pay though, as illustrated by the following chart, computing the standard deviation (volatility) of annual returns for the same cycles. In the case of MCV, the increased volatility wasn’t that large, but in the case of SCV, it was much more stomach churning for most cycles.

Finally, let’s look at the safe withdrawal rate (SWR) for the same cycles. Unsurprisingly, retirees would have been better off with value-oriented 60/40 portfolios (although it would probably have been difficult to predict it without hindsight).

The following Telltale chart compares the trajectories of portfolios made of a single asset class, namely International Small Caps, Emerging Markets, Total International, and US Real Estate Investment Trusts (REITs), while the Telltale benchmark remains the US Total Market (TSM).

The chart shows the relative trajectory in recent decades, since 1970, of an initial investment of $100. Note that the vertical axis is linear, for better readability. Historical returns aren’t available for Int’l Small and Emerging for the 70s and early 80s, and they were approximated to Total International, to allow a consistent display on the chart. 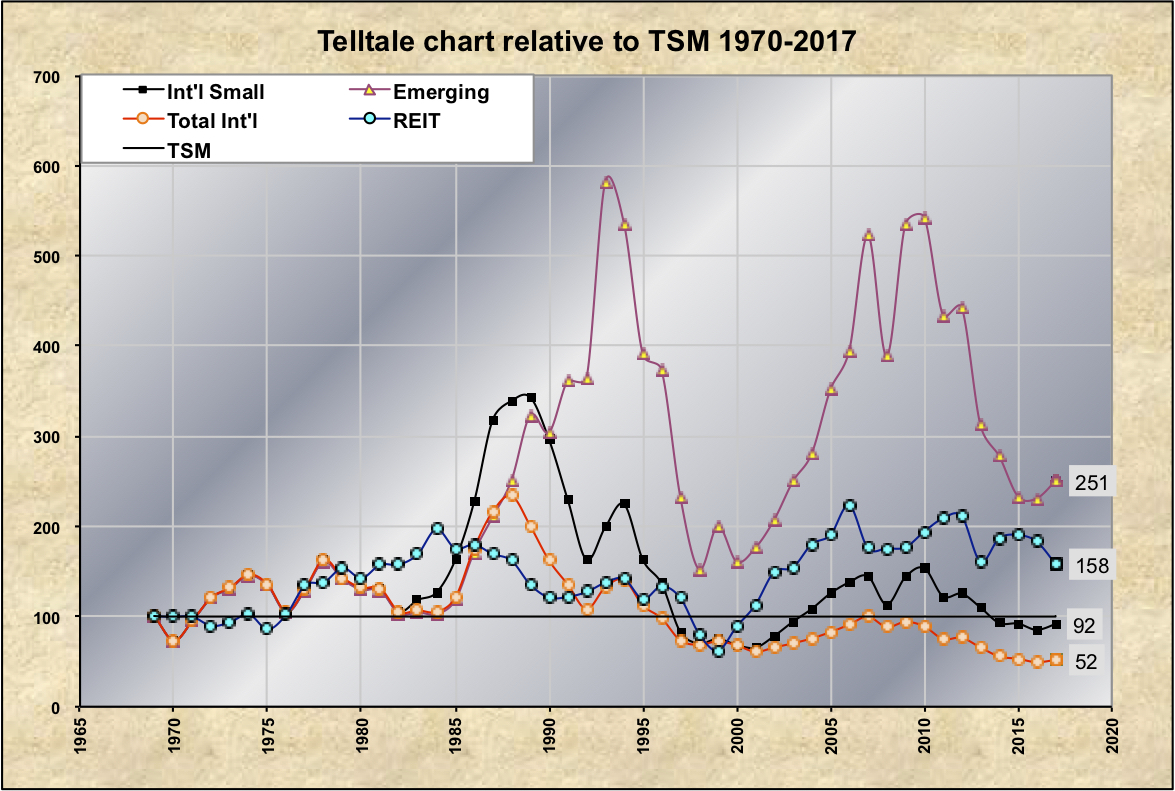 Now let’s look at the charts illustrating risks and returns. The first chart compares standard deviation (volatility) as a measure of risk to returns (nominal) for the 1970+ time period. The second chart illustrates common used risk ratios. The results of the second chart seem actually quite counterintuitive in this case, illustrating the debatable nature of such ratios in the author’s opinion. 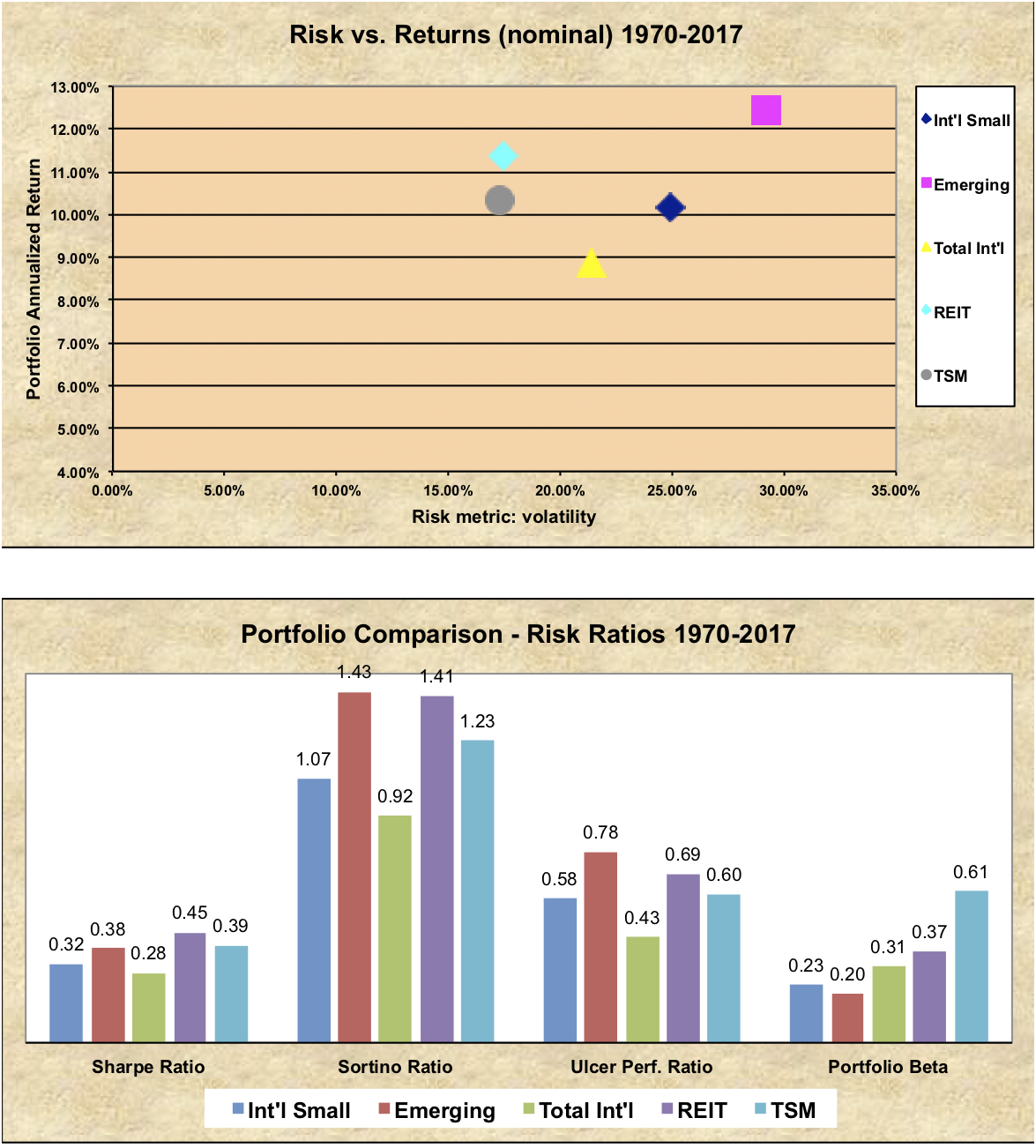 To finish, let’s take a quick look to Telltale charts illustrating the trajectory of multiple portfolios mixing US stocks and bonds to various degrees (from 30/70 to 90/10). In this case, the Telltale benchmark is the classic 60/40 portfolio.
The leftmost chart illustrates the relative trajectory for 1970 to 2017 (48 years) of an initial investment of $100. The rightmost chart illustrates another 48 years period, starting from 1927, and finishing in 1974.

One could infer some tentative conclusions from one of those charts, and see them invalidated on the other one (give it a try!). This was intended to provide a word of caution to finish this article.

Telltale charts are very informative for sure, but the human brain has this tendency to perceive patterns and jump to conclusions a little bit too fast… It is very unfortunate that there is no publicly available data allowing to backtest the value and size factors outside the US, or backtest international and REIT returns before 1970, in order to provide ‘out of sample’ analysis. In the mean time, one is left to make a judgment call about the possible applicability of such findings in the future; using a big grain of salt to do so seems in order.

Based on feedback received on the Bogleheads forum, a few more charts were created.

More about the size factor

Unsurprisingly (given the respective market weights), LCB stayed very close to TSM. The MCB trajectory had a rough start for decades, but did create some nice premium since 1970. The MCV and SCB numbers are the same as previously illustrated, with a nice upward trajectory, although SCB didn’t do much (relative to TSM) in the past three decades.

When looking at aggregate growth numbers expressed in US dollars and comparing the trajectory of International funds to the US market, we can hypothesize that the strength or weakness of the US dollar compared to currencies of the rest of the world is impactful.
The Federal Reserve tracks the “Foreign Exchange Value of the Dollar” where the weights of the currencies of a “large group of major U.S. trading partners” is turned into an index (dubbed H.10). The index weights, which change over time, are derived from U.S. export shares and from U.S. and foreign import shares. Monthly values for the H.10 index are found on the Federal Reserve Web site. Values started at 100 (arbitrarily, when the index was created in March 1973), a high value indicating a ‘strong’ dollar, a low value indicating a ‘weak’ dollar.

The following Telltale chart focuses on Total-International relative to the US Total-Market (vertical axis on the left), while adding a separate data series (vertical axis on the right) for the H.10 index. We can notice negative correlation between the two lines of the graph, consistent with the hypothesis. Note that the H.10 historical average so far is roughly 95. 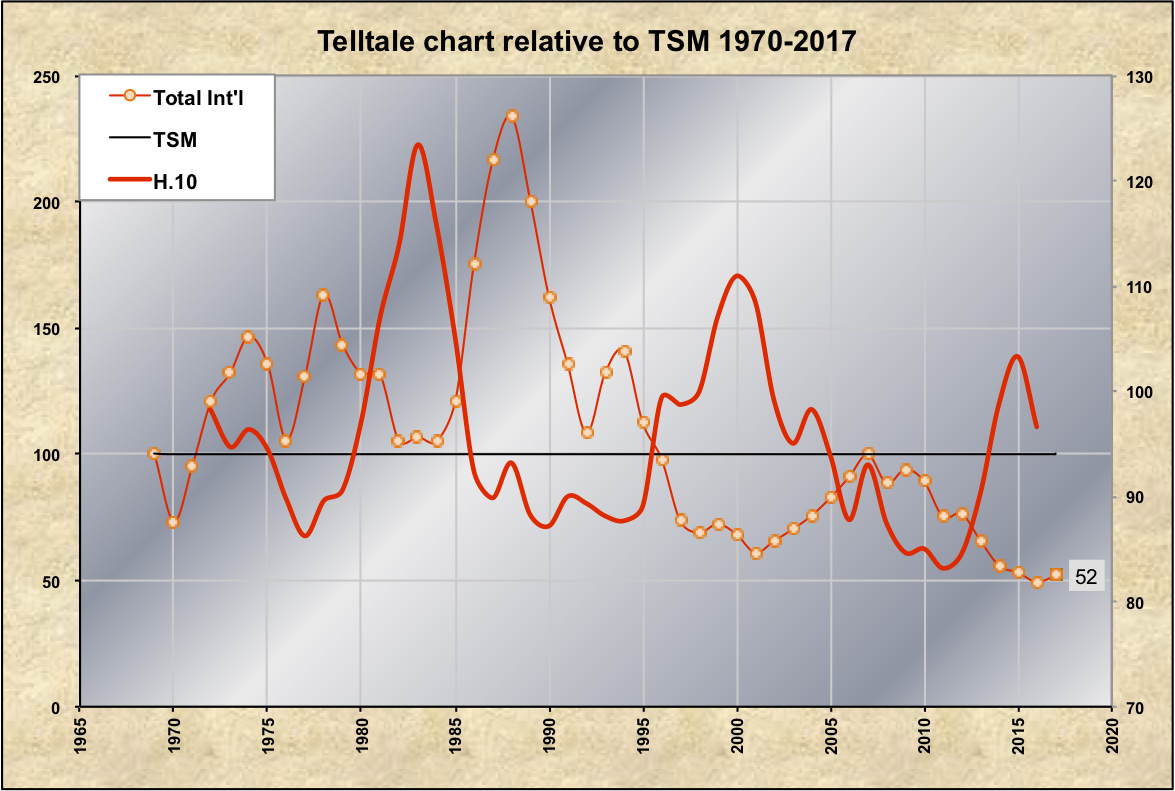