Vanguard manages two funds addressing the International Small-Caps market segment. The Vanguard International Explorer Fund (VINEX) is one of them. It was launched in Nov-96 by a UK investment company (Schroders PLC), then acquired by Vanguard in Mar-02, and it keeps operating as an active fund to this day.

More recently (Apr-09), Vanguard launched the Vanguard FTSE All-World ex-US Small-Cap Index Fund (VFSVX – also known as VSS in ETF form), a passive index fund.
This articles explores the differences between the two funds, as an attempt to help investors decide which one is best suited for them.

What are those funds tracking?

One of the key differences between those two funds is the respective index that they track, and the definition of those indices:

In other words, the investor has to decide if exposure should be restricted to developed countries (VINEX), or also include emerging countries (VFSVX). As we’ll see in the following study, this appears to be the primary decision factor, probably more important than the active vs. passive distinction or any past performance consideration.

Note that, somewhat strangely, Vanguard reports that VINEX has in fact *some* exposure to emerging markets (at the end of June 2017, 6.7% of its portfolio). While VFSVX was reported as having 19.1% of its portfolio made of emerging countries, which is consistent with the market weight of emerging markets as part of the overall (ex US) International market — see the breakdown of Vanguard Total International Stock Index Fund (VGTSX).

Active vs. Passive for International Small-Caps

There is significant debate about the fact that International Small might be the last bastion where a talented fund manager can make a true and sustained difference actively managing its fund.

Vanguard’s International Explorer Fund is one of the approximately 20% of international small-cap funds that has outperformed its benchmark over the last 15 years (table below). This category does appear to be one where it’s been a bit easier to consistently beat the index, at least for this particular time period.

The VINEX fund has a fairly long history, and its aggregate performance is pretty good (9.6% from 1997 until mid-2017).  For reference, VTSMX (Vanguard Total Stock Market Index Fund) returned 7.9% during the same time period, while VGTSX (Vanguard Total International Stock Index Fund) only returned 4.8%.

VINEX’s performance before 2003 may not be entirely relevant though, as it wasn’t operated by Vanguard by then. One can suspect that the pre-acquisition VINEX managers may have used a methodology which had relatively little in common with the post-acquisition methodology.

Coincidentally, the FTSE index tracked by VFSVX was launched at the end in 2002. This all speaks to focus the performance comparison to the time period starting in 2003.

The following section analyzes annual total returns (dividends included) from 2003 to 2017. For the years 2003 to 2016, the full year is taken in account. For the year 2017, due to the time of writing of this article, only the first half of the year (i.e. January to June) is accounted for.

As usual with Vanguard funds, the performance is expressed after subtracting the Expense Ratio (ER) of the corresponding funds (at the time of writing: 0.41% for VINEX, 0.27% for VFSVX). Note that VFSVX has no Admiral equivalent, but the ETF form of VFSVX has an ER of 0.13%. Still, we’ll stick to mutual funds for the rest of the analysis.

Since the inception date of VFSVX is Apr-09, the VFSVX historical returns are equated to the historical returns of its FTSE index for the years 2003 to 2009. Since VFSVX is a passive fund, it tracks its index very closely, and such approximation is very reasonable (Vanguard being really good at such index tracking, as demonstrated in the next section).
Let’s look at various metrics now (the following table and most charts in this article were created with a customized version of the Simba backtesting spreadsheet). 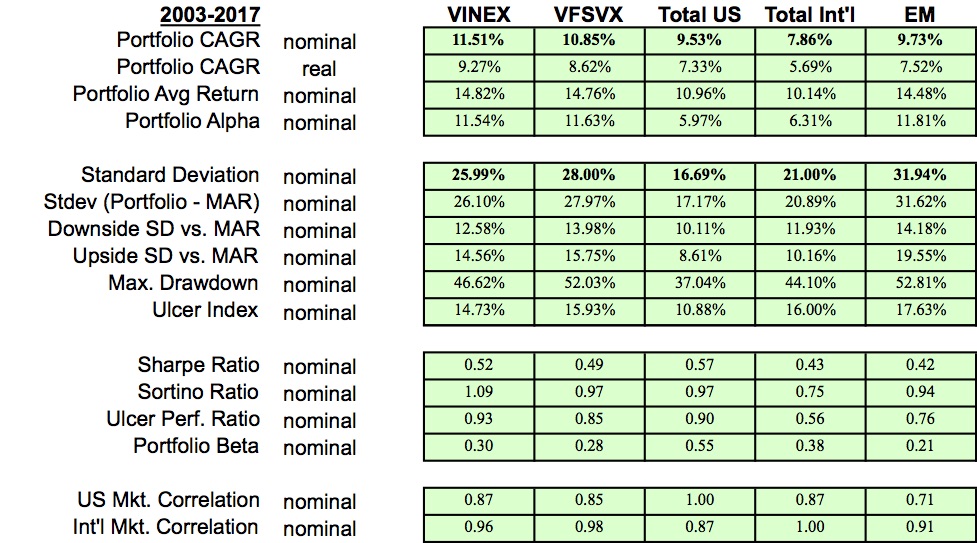 As you can see, the historical performance of the two International Small-Caps funds during the past 15 years has been quite similar, with a nominal CAGR close to 11%, outpacing the broader funds being compared in the table. Standard deviation (volatility) and drawdowns were quite high though, and a tad higher for VFSVX, which shouldn’t be surprising given the inclusion of emerging markets.

The following chart is a growth chart of $1 for the same time period, from which similar conclusions can be derived. It all started with a stellar year in 2003 (returns higher than 50% in both cases) for International Small-Caps funds… Note that the vertical axis of this chart uses a log scale. 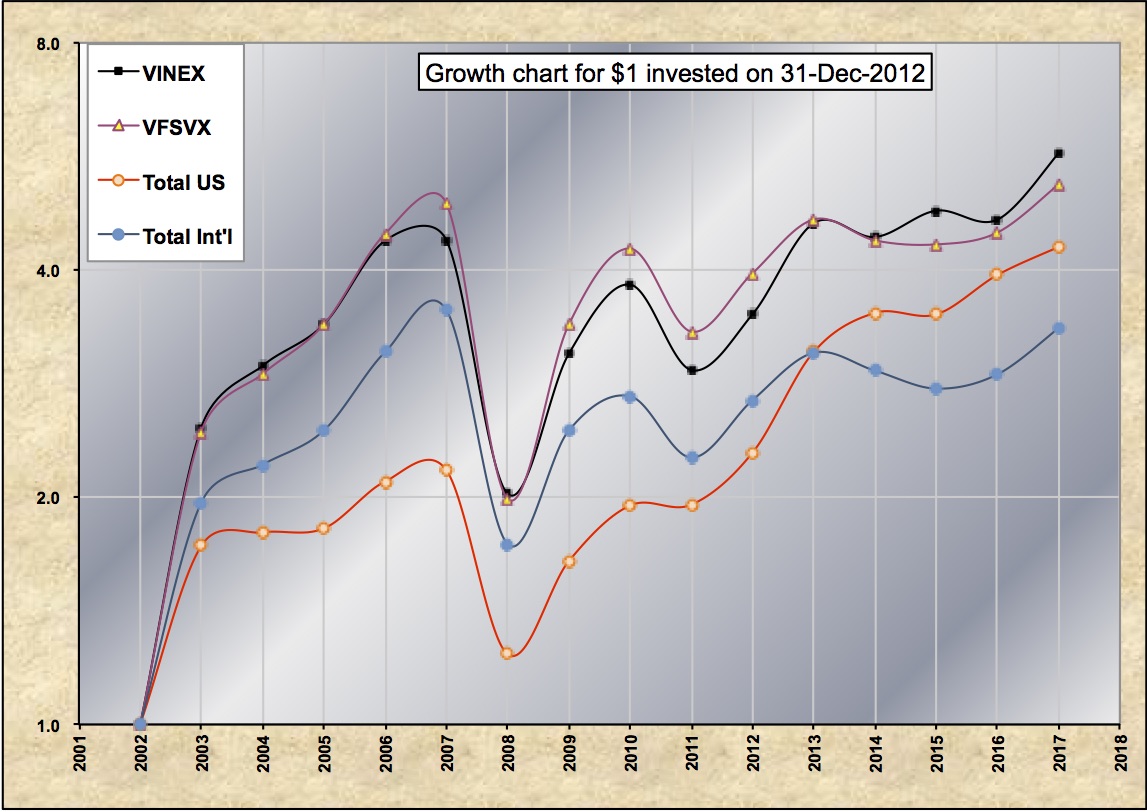 Another thing we can do is to tease out the ‘active’ factor and do a direct comparison with and between the indices that VINEX and VFSVX follow. Getting relevant data turned out to be a bit tricky though. Here are the gory details: 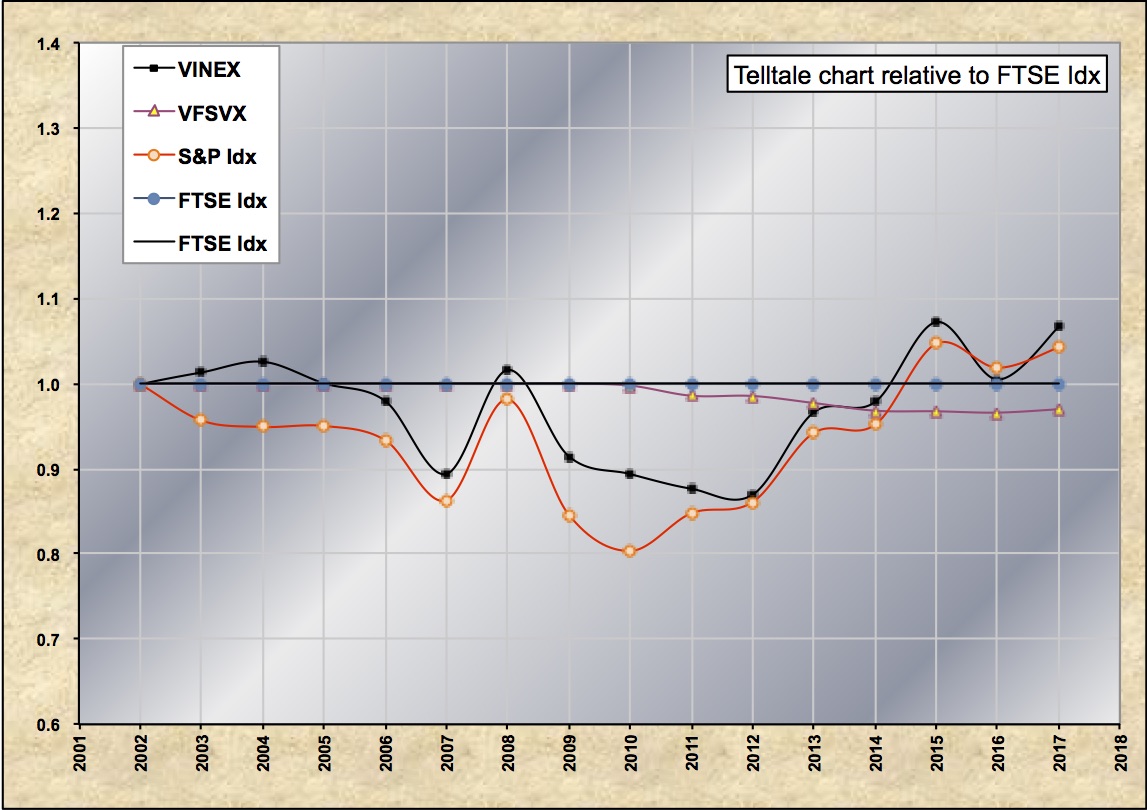 The outcome is quite interesting:

As previously explained, VINEX trajectory before 2003 may not be entirely relevant, but one might still be curious… In addition, it would be interesting to extend the comparison between indices tracking small-caps in developed-only and all-world markets. The S&P EPAC index tracked by VINEX actually goes back to 1990 in its TR form, and should provide a good indication about developed-only countries. The FTSE index tracked by VFSVX doesn’t have such long history, but the MSCI ACWI Ex USA Small is fairly equivalent in its definition (an all-world index mixing developed countries and emerging countries) and goes back to 1995. The primary difference between the FTSE index and the MSCI index is the way South Korea is classified, and that’s a fairly recent event.

Let’s use the MSCI index as a reference this time, and assemble a telltale chart comparing VINEX and the S&P EPAC index to the reference, from VINEX’s inception till now. For the sake of verifying our assumptions, the FTSE trajectory was included, starting from its inception (end of 2002) and equated to the MSCI index for previous years. 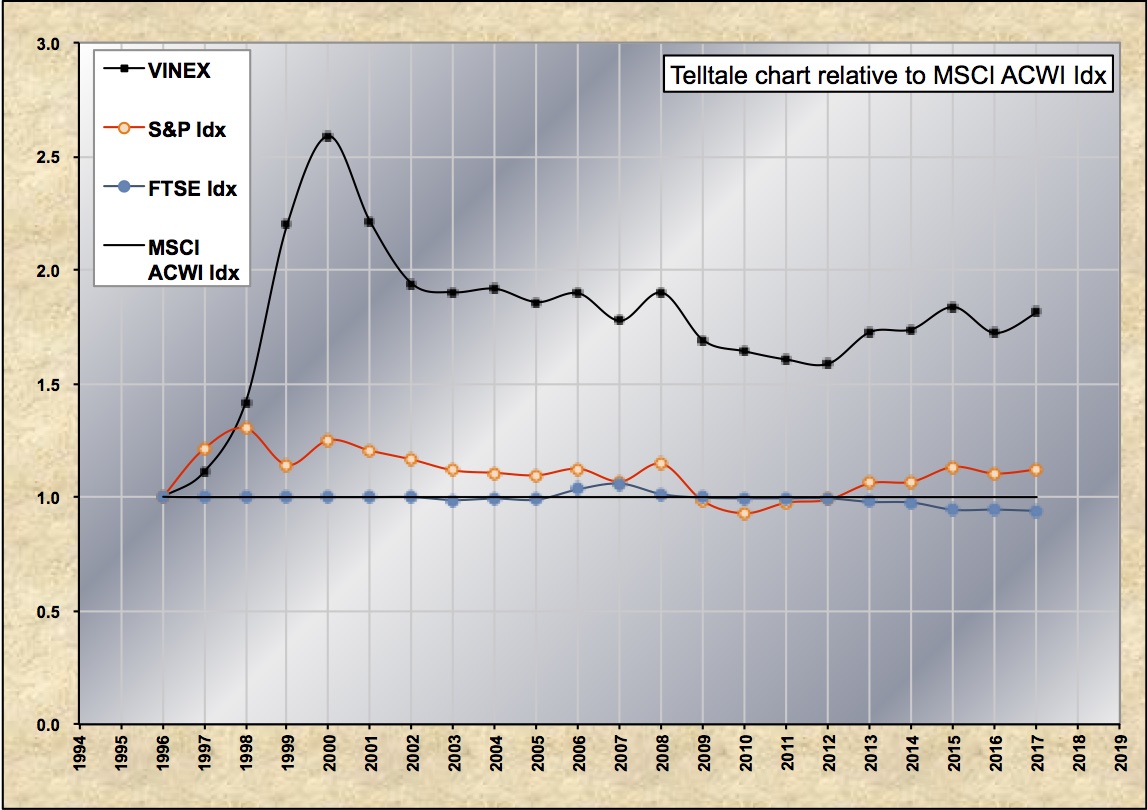 This confirms our various assumptions:

According to this Wiki page about VINEX on the Bogleheads site, its distribution of realized gains is considerably higher than distributions from international index funds, and the dividend yield is also relatively high. Consequently, the fund is usually recommended for placement in tax-advantaged accounts

According to this Wiki page about VFSVX on the Bogleheads site, this fund is a suitable candidate for placement in taxable accounts.

On the other hand, the investor probably should not agonize much about corresponding track records, nor the fact that VINEX is (somewhat) more active than VFSVX and has a slightly higher expense ratio. Both funds did well in the past compared to their benchmarks, easily compensating for their fees and then more.

Finally, VINEX might be more suitable for tax-advantaged accounts, while VFSVX would be fine in taxable accounts.